This is a coif. The word has rapidly changed meaning during the 20th Century, and it now is used vigorously by celebrity websites to describe hair-dos (usually bad ones) or in reference to any headdress or hat. In the past, however, coif referred to a small, bonnet-like cap usually made from linen or silk  that fit close to the head.  It’s name is pronounced “qwaf,” a sound which, if it was an onomatopoeia, summons visions of rotten fruit hitting the ground or the delicate suppression of a full-bellied burp.  How can anyone look good with a starchy napkin draped over their head like a sack? This disregarded head garment, however, is a lot more interesting (and sexy) than it’s name may lead you to think! 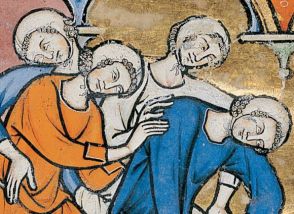 Plain linen coifs were worn as a foundation head garment beginning in the Middle ages. Men wore them while working the fields and children wore them while playing outside. Ladies most often wore veils and turbans over their coifs. Unlike men or children, a proper lady wouldn’t dare go outside the house without covering her coif with a hat or veil first! Coifs for women became especially popular during the 1500s. The trend originated by combining the practicality of a man’s cap with a veil’s delicate beauty. Early lady’s coifs were worn to promote modesty, tame the hair, and– as an added bonus– keep lice infestations at bay. It was worn almost all the time, except to comb and clean the hair. It was worn to bed to keep the hair in place, in the kitchen to keep the smoke out, and especially out in public under all the fashionable hats, hoods, and veils!

The coif was considered an undergarment of sorts. Uncovered hair was naked, and the coif acted like a chemise for the head. It would never be worn uncovered outside the safety of the house. Though fashion rules are rather lax today, you wouldn’t want to go to work in just your knickers if you want any sort of respect, but you can safely lounge around in them at home all you like. So it was with the coif. Only the lower classes, who could not afford fancy headgear, wore the coif alone.

The most popular color for coifs is white. White linen, white silk, white satin, white anything! The basic coif was simple: a square of fabric gathered shut on one end and pulled over the head. Most Renaissance coifs were made all in one piece, like this one:

Notice how it looks like a widened urn, creating longer side panels and a puffed back to the coif, framing the face and allowing more room to tuck long hair into. They became exceedingly popular during the early 17th Century from about 1600-1650, which is why many puritan costumes incorporate a bonnet-like coif as standard fare. Coifs, however, didn’t have to shade the face, just cover the hair, and they often ended around the ears.

This painting by Caspar Netscher shows a delicately-coiffed woman sitting at home making bobbin lace, perhaps to decorate more of her coifs. Notice how her coif is not plain white, but covered in twining black vine patterns. There’s even a little bird embroidered on the side. This line of needlework is called blackwork and it was all the rage during the Elizabethan and Stuart periods. It was sewn on cuffs, collars, gloves, and especially coifs. Here’s a close-up view of a coif covered in blackwork:

Every bit of that is carefully hand sewn. Some blackwork even has special stitching techniques that allow for woodblock printing details like cross hatching and half-tone shadows. Embroidery didn’t always have to be black. Redwork was also popular using a brick-red colored thread that contrasted beautifully with the white linen or silk. Vine patterns, holly, flowers, birds, bugs, and fruit were all popular themes. This redwork example even has life-like squirrels frolicking through the pattern!

The examples above have extra special touches: gilded silver thread accents on the blackwork and small silver sequins on the redwork. These beautiful embroidery accents are made from actual precious metals! The next example shows at 17th Century coif blooming with brilliant polychrome embroidery.The MMA website allows you to zoom in on the design, revealing not only the crispness of the colors, but that it is also spangled with silver sequins!

Since coifs would usually be covered outdoors and be seen only in the house,why decorate them with such amazing, time-consuming embroidery? Firstly, coifs were not always covered completely when outdoors; a hat or French hood may let the sides peek out around a woman’s ears, allowing her needlework skills to be displayed for all to see. Much like samplers, the more delicately decorated the coif, the more skilled and desirable the woman is presumed to be. At home, the fineness of the embroidery set a lady apart from her servants and added a little bit of Renaissance bling to her house dress, kind of like putting a fancy satin robe over your negligee when you lounge around at home on a rainy day.The painting below (The Morning Toilet by Jan Steen) is quite scandalous– no stockings, a flash of high thigh and buttock, a satin housecoat, and she’s not even out of her night coif yet!

There was a whole series of these sort of paintings done  by a range of artists during the 1600s. They are akin to the pin-ups of the 1950s, flashing a little here and there, chaste, but far more titillating and intimate than all those famous nudes. Her coif isn’t just her pajamas, it’s like a key piece of her negligee, that special touch that she only shows when she’s alone at home. Fashions change quickly, however, and by the 18th century, sexuality in the upper classes was much more blatant. Heaving busts and gigantic wigs defied the purpose of the coif, rendering the need for decoration null and void. The coif became a necessity under wigs and hair pieces, but by 1800, the coif as it had been known had all but vanished. The coif still existed on the fringes, morphing into long, lapel-brushing lace bonnets and hairnets called snoods during the 19th century, but its reign as a fashionable headpiece was over. It remained a piece of folk costuming throughout Europe and as an American prairie legend, slowly developing its current bonnet-like identity associated with elderly Puritans and infants.

Though they may not be considered fashionable, flattering garments today (much less sexy negligee!), coifs are an essential part to any Renaissance wardrobe. They can be just as beautiful as any hat or headband, and they’re practical too! Perfect for wintery reenactments or for keeping your hair out of your face while you catch some beauty sleep without leaving that unmanageable pony-tail wave or stiff neck you get from wearing a scrunchie. It may not look sexy by modern standards, but attractiveness surges with optimistic confidence and you will feel darn confident after a restful night sleep in your coif and knowing that no matter how windy or humid, your awesome coif will keep your hair in check and under control! :)

One thought on “Fashion’s Least-Sexy Accessories: The Coif” 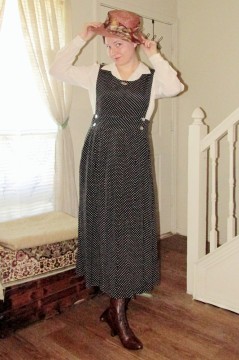