I love the coral necklaces I find in Renaissance portraits of women. There is something much more amiable and  sophisticated about a simple string of coral beads in contrast to the elaborate parures of gold, jewels, and pearls that the upper classes were bathed in. Jewelry was expensive during the Renaissance, since it was made of precious gems by craftsmen and not in a factory in China. When you received a piece of jewelry, you often kept it throughout your life. Some of the red beaded necklaces in these portraits could very well be coral beads that were given to the woman as a child and then re-strung as she got older. Bright red coral was also considered a symbol of youth, since it was so closely associated with vibrancy and health.

Coral has always been a popular gem, and is peculiar because unlike gemstones, coral is a “living gem.” Instead of being formed in the earth, it grows beneath the ocean, so it’s constantly renewing itself (so long as we don’t allow modern pollution and harvesting to destroy it). This special quality gave the stone a reputation as a preserver of life, a protector, and a healer. During the Renaissance and Baroque periods, coral was an especially popular gem to give to children as a protective charm, either as beads or carved amulets, a tradition that still lives on today. 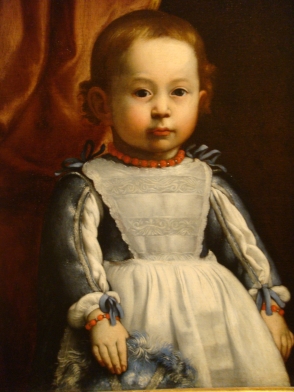 Coral was also used for teething, since it is hard, but yielding. Comparatively speaking, coral is soft gemstone. It won’t chip like stone or splinter like wood, making it a popular material in antique baby rattles and teething pendants. 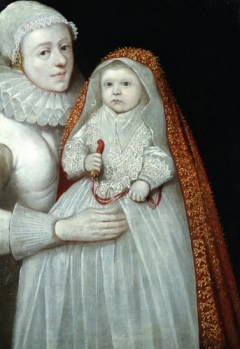 A small strand of coral beads is the perfect necklace for a middle class Renaissance woman and is an especially nice touch to a child’s costume as well! I had a strand of coral beads, but I’ve been kicking myself because I can’t find them anywhere now. Dyed coral is easy to find and relatively inexpensive, so I might have to make myself a new string!

2 thoughts on “The Red Beads of the Renaissance (and Later)”