Gain Some Dental Wisdom While I Lose Mine!

I’m suffering through the aftermath of having my errant wisdom teeth pulled, so I don’t expect to be writing too much this week. I don’t fancy leaving you all in the dark, so here is a collection of antique tooth-related artifacts to tide us over until my head stops pounding!

Gold Toothpick, circa 1580
Fancy toothpicks were an essential part of any upper class toilet during the Renaissance. They have been found everywhere, from buried under old houses to the bottom of the sea in a shipwreck. No conscientious noble would be caught at a fancy soiree without one!

Personal Accessory Case, circa 1766
Includes a tongue scraper, an implement I thought was relatively new. Turns out that the scrapers were a preferred method of combating bad breath in Europe before toothbrushes became prevalent.

Shakumi Character Mask, circa 1985
Japanese Noh theater masks portray many different characters. This particular mask has blackened teeth which was a popular beauty treatment in the upper class since the Middle Ages.

Blacking the Teeth, circa 1802

Ishibe: Woman with Toothbrush, circa 1845
Japanese toothbrushes were more paint-brush shaped than modern toothbrushes. As you can see in this painting, they were often double ended and were dipped repeatedly into clean water to freshen them. Originally toothbrushes were fibrous sticks that early civilizations like the Egyptians chewed to scrape off plaque.

The Yanagiya Toothbrush Shop, circa 1789

Man’s Wolf Tooth Ring, circa 1200-1375
Wolf’s tooth was believed to have magical healing properties. This ring mixes both pagan and Christian beliefs: on one side is engraved with a Biblical saying and on the other is an incantation to dispel toothache. 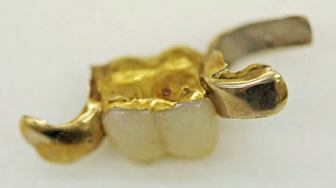 19th Century Victorian Denture
Dentures were essential in a world where dental hygiene was iffy at best. The most famous pair of dentures of all time belonged to George Washington. This particular piece is a tooth replacement, not a full denture. The gold bands would have wraped around the remaining teeth to hold the replacement in the mouth. It was common for people to lose teeth at a very young age. Wisdom teeth back then were not always the curse they are today since they often filled in gaps left by rotten, cracked, or lost teeth.

One thought on “Antique Oral Hygiene”