Reforming Modern to fit the Reformation!

I am a mad thrifter. In fact, I rather prefer cobbling my costumes together from recycled raiment rather than sewing them from scratch. It’s an exercise in patience– a cycle of search, discovery, rejection, appropriation, and reinvention.

“Portrait of a Woman Holding Gloves” by Paolo Caliari, circa 1560

These eras (much like the Civil War era as well) often involve massive amounts of fabric, especially for upper-class costumes. Modern clothing just doesn’t have that kind of volume outside of wedding and other formal dresses. Another challenge is the fit. During these three centuries, the “pair of bodies” and “stays” became premier undergarments. Stays are much different from a bra and 19th century corsets. Stays have a conical shape and flatten the chest, a style that is almost the antithesis of the 21st century silhouette!

Sewing a gown like these from scratch is a daunting task even for a dedicated seamstress, but by using a few tricks and a keen eye, one need not master patterning and stitchery before making a decent historical costume. For the casual costumer, there is the magical world of thrift shopping…

As evidenced by many of my previous posts, I am enamored with the 17th century, particularly the first half of the century. Informal portraits and blackwork are my absolute favorites. I wanted to make something similar to these portraits:

“Elizabeth Craven, Lady Powis” by an Artist of the British School, circa 1622

“Lettice Knollys, Daughter of Henry Knollys” by Unknown Painter, circa 1620
I am not sure if this painting is properly attributed. This women looks nothing like the famous Lettice Knollys. Perhaps they share a name? If you know who this lovely lady is, please let me know!

“Margaret Layton” by Marcus Gheeraerts, circa 1620
This portrait is famous for having the matching jacket along with it!

During the 17th and 18th century, there was a huge market for cast-off clothes. Once the higher nobles got tired of their older finery, they would sell it to lesser nobles, who in turn would pass it on to merchants, and so on until it passed to lowly peasants such as myself. So in the spirit of 17th century thrift, I set myself the challenge of finding just such an outfit!

A few guidelines to thrifting a successful historical costume:

First, thoroughly research what time period/decade/character you wish to emulate. Familiarize yourself with popular fabric patterns, trims, and most importantly, silhouettes of the era. You cannot construct a historical costume if you don’t know what the finished product should look like!

Second, browse through everything, including what you already own. For the “easy” eras mentioned above (Edwardian, 1920s, Regency, etc.), little to no alteration may be needed to make a garment look period, but if you find something too big, it’s easy to take it in. Keep in mind what you learned during your research. You may find the perfectly shaped skirt, but if it’s lime green splashed with orange roses, you may have to pass on it. Other situations can be remedied with a little work: Can you re-cut that jacket? Would that too-small dress work if you were wearing a corset or girdle? Should you dye that maxi skirt a darker color? Can you use that ugly skirt for a petticoat? Could that old pillow be used as a bustle? Goodwill always has loads of silk and linen shirts for cheaper than buying yardage!

Third, accept that unless you are lucky enough to find a period piece that fits you, your costume will not be “historically accurate.” You are taking modern (or vintage) clothing and manipulating it to look historical, so construction and materials will probably not stand up to museum scrutiny. In this case, it’s all about looks. So do not worry if you find the prefect 1970s-does-Edwardian dress, but it’s made from nylon lace. If it looks the way you want it, buy it! Polyester is not a pariah in the presence of a pragmatic penny pincher!

By following these rules, I hoped to gather up a respectable 17th century facade. I already had my “Universal Undergarments” in order:

My Universal Undergarments consist of my cheap eBay corset, two tank tops (one for a corset liner, the other as a corset cover), a 1980s cotton skirt as a petticoat, and my thigh-high O Basics stockings. Since I would be costuming for the 17th century, I also needed a bumroll which I cut out of the fabric left over from making my 18th century embroidered stomacher:

I just cut a crescent shape out of the fabric, sewed it like a pillow, and stuffed it full of fabric strips and scraps (hence the lumpy appearance compared to a roll stuffed with polyfill or cotton). The ties are double-fold bias tape left over from making my coif.

I particularly like my cheap eBay corset because it is pretty tubular. Normally this tubular shape would be a detriment to a corset’s function, but in this case, the conical shape works very well. It’s the closest thing to mas-manufactured stays I have found! I also donned my slightly-too-small blackwork coif.

My next step was planning the outfit. I would need a suitable jacket and skirt to make up the bulk of the outfit. The skirt/petticoat was the easiest part. Long, full skirts with drawstring waists are popular wedding attire in India and I found a beautiful vintage one on Etsy: 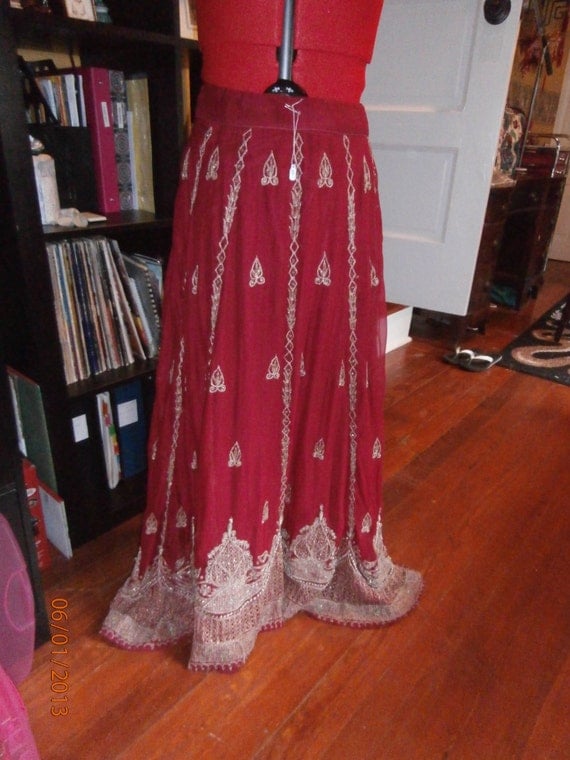 This is the seller’s photo. She makes belly dance costumes and is very nice!

To go with my skirt, I really wanted an embroidered jacket like one of these:

The Maidstone Pea-Pod Redwork Jacket, circa 1620
Laura Mellin made a beautiful jacket based off this one by hand! It’s truly incredible!

Polychrome Embroidered Jacket, circa 1616
This one gave me shape inspiration.

After a day or so, I found THE PERFECT JACKET, but after winning the auction and making squee noises, the seller sent me a refund and a note stating that she must have already sold the jacket (I assume in a brick and mortar store) because she could not find it. I won’t lie, I was crushed, but no one said thrifting online was easy! The polychrome-on-white style of embroidery popular in the 17th century isn’t really in vogue right now, and most of the examples I fawned over were expensive designer pieces, but black and white are pretty timeless. I soon found a suitable replacement:

The embroidery pattern isn’t particularly accurate for the period, unless you count this jacket at the V&A or this one from Manchester, both of which are 10 years after the period I was trying to work within. We’ll just say that my 17th century self was ahead of the fashion curve! The materials aren’t “history kosher” either. It’s made from nylon and spandex with a little viscose for flavor cooked up by the designers at Laura Ashley. However, it was a Petite Large, which turned out to be exactly what I needed! It started off baggy, but by turning it inside out, putting it on over my “stays,” and pinning it to fit tightly from my waist up, I achieved a pleasing jacket shape with a flared bottom. I used big ol’ ugly backstitches to sew it together, trimmed the excess from the seams and was done with it! I didn’t take any pictures of that, so instead, bask in the glory of this crudely-drawn rendering of what I did:

The grey areas indicate what I removed from the jacket. Modern clothes fit really loosely, especially under the arms. I had to go back and take even more out of the armpit to make sure it fit smoothly!

Other than that, I did very little alteration. I even left the invisible zipper up the front of the jacket. Affixing my blackwork bow to the front helps hide it even further.

The 17th century was all about bows!

A few more accessories and one hastily-constructed backdrop later, here’s the result:

I enjoy wearing all my jewelry all at once (especially my second-knuckle rings)! I still need to make a pair of cuffs for the sleeves.

I was worried about finding some proper shoes, but as it turns out, these simple t-straps (“Jean” by Angel Steps) are just perfect! They have a low heel and come in wides, plus the elastic isn’t obvious and provides great comfort when walking. Many of the reviewers had ordered them to dance in. I had some difficulty ordering them since they went out of stock and no one at the company notified me. They also call you with a pushy sales pitch for insurance which I promptly declined. If you can find someone other than AmeriMark/BeautyBoutique to buy from, let me know! I love these shoes, but I don’t love the company.

The Breakdown
This is a list of everything that went into making this costume and how much it cost.

I’m only including items unique to this outfit since almost every outfit I wear has the same basic undergarments! All the jewelry is from my collection.

It took me about three months to assemble everything for this costume. It was a labor of both laziness and love. I hope to keep adding to it, perhaps making cuffs, fashioning a classier ruff, adding a hat, making an apron, and adding either a shoulder drape or one of those sleeveless overdresses you commonly see worn in portraits of ladies in embroidered jackets!