I hope everyone had a wonderful holiday!

I am an avid lover of antique paste jewelry. Paste stones aren’t made of sticky, gluey paste, but are shaped from pieces of rock crystal or glass. The most famous form of paste stones, rhinestones, originated in Central Europe during the 13th century and were made from pieces of quartz crystals found in the River Rhine. To imitate colored gemstones like rubies or emeralds, jewellers would back quartz paste with colored foil. In the 18th century, Georg Strass invented the familiar foil-backed glass paste still in use today. Modern “rhinestones,” however, bear little resemblance to their antique counterparts, so I tend to draw a distinct line between antique paste stones and modern rhinestones (though some rhinestone pieces can add some 18th century inspired sparkle on a budget). Paste stones are relatively heavy, cut to just as gems are, and set just as a precious gemstone would be. Many paste stones are set in precious metals like silver, gold, and even platinum.

Yellow Glass Paste Brooch made to Imitate Citrine, circa 1740-50

Rock Crystal Triplets, Rock Crystal, and Glass Paste Pendant
Triplets are composite stones made of 3 layers, in this case: two layers of quartz with a layer of red foil or glass between. Triplets and doublets (two layers) were often made to bulk up small chips of precious gemstones like rubies and emeralds. This practice is still done today.

Clear Glass Paste Brooch, circa 1910
Paste-quality stones didn’t just vanish at the end of the 18th century. The Victorians and Edwardians continued the love affair with paste, producing beautiful pieces set in precious metals–Victorians preferred gold while Edwardians preferred silver and platinum. Georgians often set their pastes in silver-topped gold. The name “paste” usually disappears around 1910 and is replaced by the ubiquitous “rhinestone.”

The glory age for paste was definitely the 18th century. Besides lovely brooches and pendants, the “it” paste accessory had to be the buckle. Buckles were used by both men and women– most notably on latchet shoes:

One of my most prized possessions is a shoe buckle I found for $20 on eBay a year or so ago. It’s made of sterling silver and filled with tiny black-dot pastes:

The high arch of the buckle helps it sit smoothly over the arch of the foot. A flat buckle would stick out awkwardly and likely catch on skirts or knock against things. My buckle is missing it’s mechanism. Here’s a handy diagram of a whole shoe buckle from American Duchess:

White paste buckles were the most common, but many buckles had colored pastes as well. Tarnish and chips aside, the pastes in my shoe buckle are all white with black-dot centers (a method of flattening the bottom point slightly to mimic a popular diamond cut).

Most shoe buckles are very valuable and way out of my budget. Even with its wear and missing parts, this buckle was a once in a lifetime find for me, or so I thought. After another whole year and a half, the thrifting angels smiled on me once more, and this time it was a total accident!

This buckle was an accidental bid. I meant to add it to my watch list, but ended up doing a one-click bid on it instead. I just went with it and a week later I had a beautiful foiled-paste buckle in my collection! 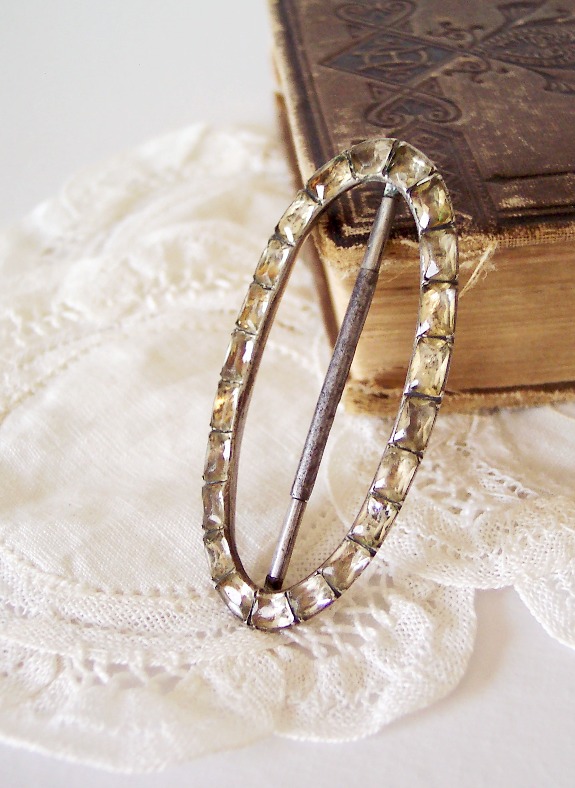 This buckle is a very elegant arched oval, leading me to believe it’s a lady’s buckle, and not necessarily a shoe buckle. It is the right height to fit over shoe latches and evidence that it once had a chape and tongue, but it has only the slightest arch and minimal wear. Another possibility is that it is a sash buckle or was once worn on a velvet band as one of a wristlet/bracelet pair. The shape also dates this buckle to the later 18th century, possibly as late as the 1810.

The prongs/chape/tongue were probably removed sometime during the early 20th century. 18th century buckles were sharp and specifically designed to pierce and hold cloth. Like their rococo ancestors, Edwardian fashionistas were also enamored with buckles, but buckles functioned mainly as decoration on elegant evening dresses and thus didn’t need the sharp prongs.

The biggest surprise about this buckle, besides how it came into my possession, is the pastes themselves: 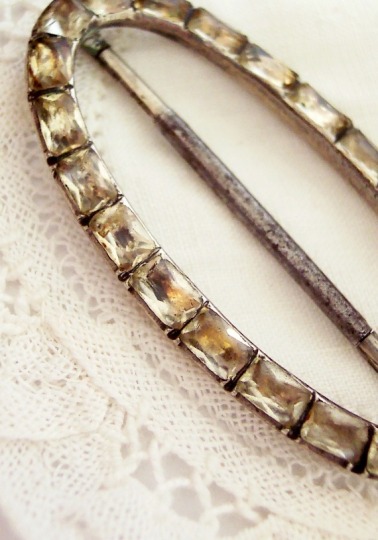 Unlike my shoe buckle, the stones on this buckle were once backed with colored foil. At first I thought it was just some tarnish, but a good gander through my jewelry loupe revealed that though most of it has faded to silver, there are traces of orange/red under a few of the stones.

The difference between white paste stones and the traces of color still left under these stones is especially visible when you put the oval buckle next to my shoe buckle:

The very yellow stone in the shoe buckle is a later (and poorer quality) replacement. It is not foiled. The difference is even more striking in person. If you ever get to see real white paste in person, it has an unbelievable silver glow.

For an accidental purchase, everything turned out rather nicely! I only “lost” about $10 and I gained a rather cute 18th century buckle for my fault.

I hope everyone is having a lovely holiday season! There’s still 4 days of Christmas left to go! :)

One thought on “Find of the Month: An Accidental 18th Century Foiled Paste Buckle”