The average Victorian woman wore OTR corsets ordered from one of the many corset manufacturers operating at the time. Because corsets were pretty much universal in Western society, Victorian OTR corsets came in many different proportional variations to fit every body type. It is currently much more difficult to find this sort of variety in modern OTR corsets, but as the popularity of corsets grows, so does the selection.

In both the costuming and corsetry communities, there has been a debate brewing about off-the-rack (OTR) corsets vs. custom corsets. Here’s a link to an example of the OTR vs. custom debate on Lucy’s Tumblr page followed by her opinion on the matter. Both communities agree that a custom corset is the safest, most comfortable option, but OTR corsets are the most accessible to beginners who are still learning. I know I made mistakes with my first few corsets purchases. The learning curve is why OTR corsets are often recommended to beginners, but it is also why some corset wearers do not like OTR. Why risk wasting money on an ill-fitting corset that could potentially turn someone off of corseting? Going custom right out of the gate assures a better fit and often better materials. That’s very true, and an excellent point, but depending on the wearer and their goals, an OTR corset may be a good fit right out of the gate at a much lower price than going custom. It is also a good option for someone who doesn’t have the time, skill, or desire to sew their own corset.

Before I go much further, I want to identify, specify, and clarify that I am talking about corsets used for costuming, not modern waist-training. Waist-training is a form of body modification that takes dedication and time to achieve, as well as a different set of criteria for the corset itself. Waist-training corsets are usually underbusts and are designed to comfortably provide the maximum waist reduction possible. Historically speaking, underbusts weren’t really used until the late 1890s (though you can use them in a pinch for historical costuming, too). The majority of corsets used in historical costuming are mid/overbusts, which are not recommended for modern waist-training. Regularly wearing an overbust corset for costuming purposes may serendipitously cause your waist to train down (our Victorian ancestors wore theirs everyday, effectively waist training), but a corset used for costuming does not need to provide much waist reduction at all to be effective. For this reason, it is very important to identify your goal and purpose for wearing a corset before choosing one.

For information and advice about using corsets for waist training rather than costuming, please visit Lucy’s Corsetry or one of the many other corset community blogs/tumblrs/YouTube channels that deal specifically with waist training.

My first “real” corset was an OTR overbust. At the time, I had no idea that there was a debate raging or that there were online communities dedicated to corset wearing and buying. I approached the situation purely from a historical costuming perspective: I needed a historical-looking corset that would be hearty and give me the shape/support I needed to costume. That’s all. I made a wishlist, set price point, and got to shopping on the one website I knew I could find them: eBay (from “Glamorous-Corset-Boutique“) . And despite what many people assume are huge odds, I successfully acquired an OTR overbust that has lasted over two years now! 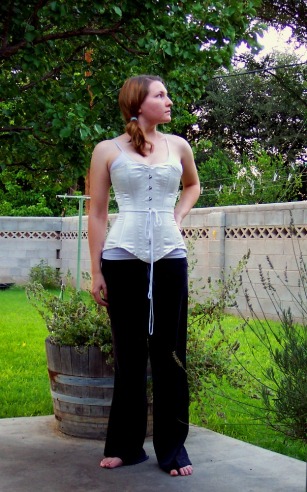 About 1 week after purchase.
You can read about that adventure here. 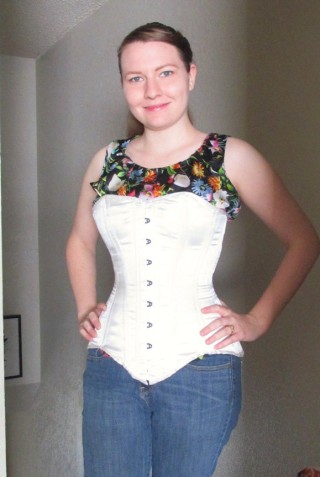 I made a few mistakes. For example, I bought a long line corset thinking I needed one since I have a long torso. While I do have a long torso, the majority of the length is above the bustline. I am actually short waisted, so the long waist-to-hip length of my first corset means that the bottom jabs into my thighs when I sit down. This is no fault of the corset itself, simply user error. It was a learning point, though, since I discovered that more measurements matter than just bust-waist-hip. Vertical numbers are important, too! Which is why I eventually saved up and bought a custom corset from Hourglass Attire that was drafted and fitted to my individual measurements.

However, just because a corset is OTR does not mean that it can’t do its job and do it well. My white satin OTR corset, despite its flaws, still has many positive qualities. Indeed, the flaws in some cases are actually helpful which is why I continue to wear it even though I own other, “better” corsets.

Con: The fabric and sewing of the corset are of poor quality. The satin has stretched over time.
Pro: The satin is soft and forms well to the body without adding extra bulk.

My OTR corset is made of two layers: a very cheap, thin white satin with a cotton twill strength layer, all rather inelegantly sewn. It does have a waist tape, but over the years, the fabric has stretched, so it is about a half inch bigger (~24.5″ rather than 24″) than when I first got it. However, I have the smallest external measurement in this corset despite the fact that it has the largest waist measure of all my corsets because it lies so closely to my skin. Its thinness and rather lax rigidity molds to my soft body while still pulling in my waist. It’s lightweight to boot, and not too hot. I don’t think this corset is suited for daily wear, but it has lasted over 2 years of occasional (rather cruel, careless) wear. Because it’s not the finest quality or very expensive, I can use and abuse this corset without feeling guilty–okay, maybe a little guilty since it has served me so well!

I’ve discussed this in a few other posts, but the shape of my OTR overbust is slim, long, and standardized. The corset is not overly hour-glassy and since it is made to fit about a B cup, it simultaneously tamps down and lifts my F cups. It basically transforms me from a short-waisted, low/big busted tube into a very average, moderately curvy figure all over. Surprisingly, it does so without being uncomfortable (lap-length aside). One of the big complaints about OTR corsets is that they are uncomfortable. I have worn uncomfortable OTR corsets, but this one is actually quite comfy aside from its excess length. In addition, the slim shape means I don’t need to perform as many pattern alterations to fit and people focus on/ask questions about my dress rather than gawking at the extremity of my figure. Make no mistake, I do like a very curvy shape, which is why I ordered a custom corset later. However, a corset doesn’t necessarily have to reduce your waist much or be a perfect match for your personal body shape to work. A corset can alter the natural shape depending on the wearer’s preference (lift/compress/enhance the breasts, nip in/elongate the waist, cup/shape the ribs, etc). So long as the size is carefully chosen and you aren’t trying to squeeze into a too-small corset, a little bit of body shifting can be a good thing. OTR corsets are not all created equal, so careful planning is need to make sure that the fit is going to be comfortable, even if it’s not perfect. The shapes may be similar between brands, but subtle style variance can make a world of difference!

Corsets were not all the same shape or construction throughout the 19th century either. The ideal body shape varied by decade as did the construction of the corsets. While you don’t have to have an ideal body shape to wear a certain era of style, having different corsets with different shaping properties can help achieve a more accurate look. For example, my low-bosomed, short-waisted natural shape was in vogue during the 1860s and 1870s. My custom corset accents that shape even further, making it ideal for wearing under the fashions from those decades. However, other decades, like the 1840s, 1880s, and 1890s, favored longer waists. I still use my custom corset for these eras, too, but my OTR corset is perfect for giving my torso a longer look for these decades if I so choose.

There is nothing wrong with wearing an off-the-rack corset. If you find an OTR corset that works for your body and your costume, there is no reason to shun it. Wearing one does not mean you are lazy, poor, or somehow ill-educated about corsets, either. A corset’s main function is support and smoothing, so as long as yours does that comfortably, it will work just fine! You also don’t have to suspend all OTR corset purchases if you bought a custom. Once you get a custom corset, you may not find OTR as comfortable or satisfying as they once were, but that doesn’t mean that you have to stop buying them. Au contraire! Unless you have lots of money to spend on many different custom corsets (or the skill to sew them yourself), OTR corsets can offer you a wide variety of styles, fabrics, and trims and are a great way to test out different silhouettes.

—A Note on Corset Ethics—

Symington corset production line, circa 1895-1900
Most major corset manufacturers from the 19th century went out of business when corsets fell out of favor during the 20th century. Now that corsets are regaining mainstream popularity, new commercial corset manufacturers are popping up to fill in the gap.

There are some ethics-based arguments about OTR corsets to take into consideration.  Many OTR corsets are made in China, Pakistan, and India in less-than-ideal conditions. There is a reason many are so inexpensive, and it’s not always the materials. Cheap corset sellers import their corsets from overseas where fair labor laws are minimal if they exist at all, raising ethical concerns about supporting OTR corset companies that may be exploiting their workers. If you are concerned about the ethical origins of your corsets, many individual corset makers offer their own lines of OTR corsets made to a standard set of measurements for a lower price than their custom pieces. Many historical corset shapes aren’t manufactured OTR at all, so depending on your desire for accuracy, a semi-custom or custom corset may be your only option if you do not want to make one yourself. Plus, if you’d like to support your local economy and artists, Lucy has a corsetiere map to find a corsetiere near you! Other places to find fairly-crafted corsets include Etsy (though you must beware of resellers), Tumblr, artists’ personal websites, or through forums and Facebook groups.
(That’s not so say that people can’t take advantage of corsetieres as well. Even if people tell you that a corset can be put together easily with the right pattern and some time, the price of a corset also reflects the maker’s time invested in learning the skills necessary to design, pattern, and sew. Don’t expect to get a corset from an artist for the price of an outsourced corset from one of the big corset importers!)

3 thoughts on “New Friends Do Not Replace Old Ones: Why I Still Wear My First OTR Corset”