I have lots of projects in various stages of “go” scattered throughout my apartment right now, but the sewing bug just refuses to bite. So, instead of sewing, I have been dallying about, doing boring modern-person stuff like working, cleaning, and other such business. One of the projects that has fallen by the wayside is an Edwardian evening gown. I have the fabric, but have yet to choose a pattern. Instead of getting my rear in gear, I decided to play with make-up instead which, while not sewing related, is one of the first costuming-related activities I’ve done in almost 2 months. So, here’s a mini-tutorial for an Edwardian evening make-up look to go along with a (in my case, not-yet-materialized) ballgown.

I’ve talked about make-up and costuming before in “Saving Face: A Brief History Cosmetics and How to Wear Them with Historical Costumes,” which focused on getting a natural look for historical costumes that would show up well in modern photographs. Victorian and Edwardian women generally did not wear much makeup, but there were exceptions. One of the Edwardian era’s most famous beauties was Lily Elsie. Even if her name sounds unfamiliar, you are probably very familiar with Lily’s many beautiful publicity photos: 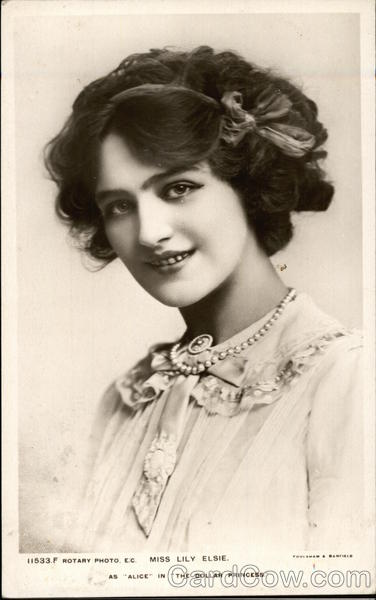 Lily Elsie was one of the era’s great actresses. Since actors and actresses needed to be seen clearly at great distances (and be beautiful for publicity portraits like those above), they wore heavier makeup than the average Edwardian woman. Lily’s signature was her dark, luscious eyebrows and rosebud lips. Doesn’t she look just like the dainty bisque dolls of the era? The cosmetic stylings of Lily and her fellow Edwardian starlets marked the beginning of a new, heavier, youth-driven fashion trend that eventually developed into the iconic flapper look of the 1920s. She was, however, one of the last big-browed beauties of the age before the pencil-thin eyebrows took over. Here she is 10 years later, around 1927, her iconic eyebrows still glorious, but tweezed into submission–much closer to our modern arched shape:

You’ll notice that the altered shape of her eyebrows dramatically changed her appearance and makes her look much more fashionable to our eyes. We are used to this eyebrow shape and many of us ladies carefully groom an angled arch into our brows. During the 19th century and first decades of the 20th century, however, thick, evenly-full brows were the coveted shape. During the Edwardian era, cosmetics began to loose much of their taboo and for evenings, a woman might take some notes from the famous female faces of the stage– filling in her brows and giving herself rosy lips for glamorous special events like visiting the opera or going to a ball.

The following make-up look is inspired by Lily Elsie’s many lovely photographs.  I specifically wanted something that would look good in the conditions of a modern Victorian-style indoor ball. I haven’t gotten to attend a formal ball yet, but it’s always good to practice a look just in case I ever get a chance! I aimed to recreate Lily’s style, but tone it down for the average woman and use makeup I already had on hand. This is not a strictly historical method, nor is it meant to be worn with every day, average Edwardian clothing. The heavy style is made to be worn for glamorous, low-light, nighttime events.

The ideal Edwardian woman had pale, bright, clear skin. I am definitely pale by modern standards, but with a smattering of splotchy freckles, a bit of a tan from wandering outside looking for fossils, and lots of redness from acne, my skin is far from the creamy porcelain ideal. So, I chose a liquid foundation to even everything out:

If my foundation choice looks far too light for my face, you’d be right. However, it matches the rest of my skin tone, particularly my décolletage, which evening gowns reveal quite a lot of, so it’s important to match. I placed a dot of the exact same foundation on the collar bone (in the lower right of the picture) for comparison. Also, you probably can barely tell, but I’ve already completely covered and blended the foundation into the right side of my face! I really like this foundation because it doesn’t make me break out, it covers really well even without concealer, and it stays put. It is on the heavy side (for me at least), so a little goes a long way!

Next I filled in my brows with the powder eyeshadow. I’ve pretty much let my eyebrows grow naturally over the years because they are so light, but they have been tweezed into more of an arch than an arc at the ends. To get the full, even look, I concentrated powder application from the center back and filled in a little under the arch. This is key to getting an old-fashioned look. Its amazing how just a few millimeters of extra thickness can completely change the timeline of your brows! I chose a dark fill color to match the roots of my hair, but a lighter color closer to my natural brow color would also work. I just really envy those big, bold brows, though!

Sorry I don’t have an “in progress” comparison shot for this. I didn’t think to do one. :(
A light touch of mascara helped fill in my lashline to match my naturally blonde eyelashes to my new, darker brows.

I used the lip stain to give my lips some natural tint, but I think I could have gone a little heavier. However, if you go too heavy, it starts to look too much like lipstick and looks more 1950s than Edwardian.

Though I just finished hiding my redness under the foundation, rosy cheeks really help bring the look together. Unlike modern  blush which is applied diagonally up and across the top of the cheek, Edwardian blush focused on the rounded apple directly in front. To find your apples just smile!

I have a very fleshy face with lots of plumpness in the lower front, so I basically end up rouging the whole front of my face! Your apples may vary in size and shape. Here, I used my hand to find where the majority of the fullness was so I didn’t end up applying too much.

Since Edwardians would have used rouge instead of the wide variety of blushes we have now, I approximated the effect with my favorite faux-rouge: cheap matte red lipstick! I dabbed a bit on my finger then tamped it lightly onto my cheeks before blending it with a clean finger.

I keep a stick of matte red lipstick just for “historical” use. It can also be used in the same manor as lip rouge in lieu of the lip stain. A little goes a long way!

This makeup look is, like my previous one, designed to photograph well under different lighting situations using a digital camera. The look does dramatically change depending on the light!

Here are some examples of the same make-up with different camera settings and lighting conditions:

So do I look like Lily? Well…no. I don’t have her naturally dainty facial structure. But did I nail the porcelain doll look?