You may be familiar with a certain Simplicity pattern, #4244. Number not ringing a bell? Perhaps the phrase “Victorian hip croissants” might: 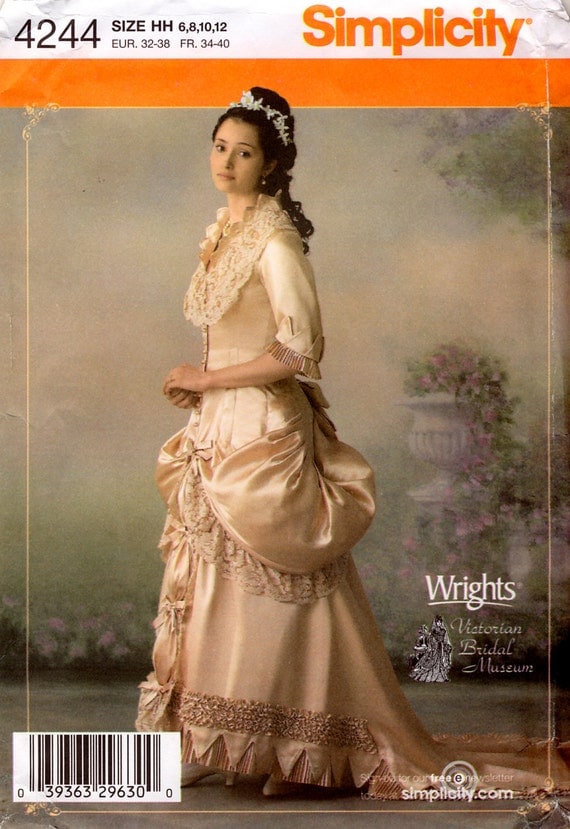 I saw this dress when it originally appeared in the pattern catalog a decade ago. It’s very ornate with lovely details, but I was confused by it as were many others. The pattern was pulled from production after only a year in print in 2006, but I never really forgot about it. The oddity of it was like a little worm that spun a chrysalis in my mind, biding its time until I was ready to take on the challenge of turning a pastry into a butterfly. Last year I finally decided that I had gained enough sewing skill to attempt the curious croissant pattern.

The very first thing I did was hunt for reviews and examples other people had made. Copies of the pattern are plentiful despite being only printed for one year, but since the pattern is OOP copies run between $20 on the low end and $70+ on the high end. I didn’t want to invest money in a pattern that was bungled up or impossible to make. Plus, the picture on the envelope and the line drawings did not provide satisfactory information about the actual fit of the gown.

The picture on the pattern cover is a side view. It showcases the croissant-forming pleats and the elbow-length sleeves. However, it doesn’t show what the front or back looks like. The line drawing on the inside, detailed as it is, wasn’t ideal for figuring out how everything draped because the woman in the drawing appeared to hovering in midair… How does the train lay on the ground? How do the poufs look from the front? How does the material choice affect the silhouette? How puffy are the hips in real life? How on earth does the back work?!
To find answers, I looked at some rare, real-world examples that had made from the pattern. It turns out that not very many people have made this dress, or at least not many people have shared pictures of it online (the pattern came out 10 years ago, after all).
I was very pleased to find 6 examples! I’ve made a Pinterest page to keep track of them:

If you have made Simplicity 4244 or make a version in the future, let me know! I would love to add your creation to my Pinterest collection. Also, I highly recommend posting a review to Sewing Machines and Pattern Review‘s website so others can learn from your experience.

For a long time, only two completed versions of the pattern were posted online, both by Heidi of Time Travel Costumes. She posted a step-by-step process on her blog and she uploaded her incredibly detailed process to Instructables. She also posted pictures on Deviant Art and wrote brief reviews: the review for the black version is here and the review for the purple version is here. In both reviews, she concludes that the 72-step pattern was “Difficult, but Great for Advanced Sewers.” I’m not the world’s greatest seamstress or even the world’s 3-millionth-greatest seamstress, and, though I crave a challenge, the sheer complexity of the gown described intimidated me.
Other versions include Sara’s pink confection from Etsy, Gina’s purple cotton version and Patti’s brown silk version shared via the Historical Costume Pattern Review group on Facebook, and Lydia’s floral cotton version from her blog, the Antique Sewist. Everyone’s reviews echoed a similar sentiment: it’s an okay pattern, but be prepared to work for it!

Thanks to their reviews and photos, I felt prepared enough to give Simplicity 4244 a try, but I still wondered:

How historically accurate is Simplicity 4244 and if it isn’t, can it be salvaged?

Many Simplicity/McCall’s/Butterick/etc. “Victorian” costume patterns are less-than-accurate. Everyone seemed rather incredulous that such a strangely constructed dress could be genuine. What, if any, era was this “Victorian” wedding dress pattern from? Did ladies ever really think wearing breakfast foods were fashionable?

Fried eggs and black coffee, anyone?

One thing historical seamstresses complain about most is the Big 3’s lack of historical background for their designs. Many independent historical pattern makers go to great lengths to provide their customers with excellent, well-researched information about their patterns. Patterns of History, for example, lists popular color choices for the particular year so you can make sure your 1888 dress isn’t made of a color that didn’t exist before 1895.
The big commercial patterns, on the other hand, barely include any explanations with their patterns, so you have to do your own sleuthing. The front of the Simplicity 4244 pattern envelope has a clue: a logo for the “Victorian Bridal Museum.” Turns out that the Victorian Bridal Museum is a real place which you can still visit! I emailed the proprietress, and the dress that this pattern is based on is not out for display, but she shared some tantalizing photos on the website:

So close to making out details on the back!

Notice that the original dress’s hips are not quite so puffed-out and smooth as the pattern picture shows. Instead, they hang in heavy folds. For the publicity photos of the reproduction, the well-meaning-but-misguided Simplicity style team padded out the sides, resulting in the overly-plumped, pastry-like appearance. It seems to be a common misunderstanding that Victorian gowns were all hugely fluffy, so even museums sometimes get overly ambitious, adding bustles were there should be none or, in the case of this unfortunate Worth gown, stuffing the skirt like it’s a Build-a-Bear…

They may be tiny photos, but they were proof that 4244 wasn’t just another Big 3 pattern of dubious accuracy, but was based off of a real dress that did, in fact, have swagged hips! The museum dates the gown to 1875, which puts it right before the Natural Form Era, but after some research, I began to find dresses in fashion plates with similar hip poofs from about 1879-1881–quite a few, actually. This is just a very small sampling showing the various styles and placements: Revue de la Mode (day dresses), 1879
Natural Form Era dresses are called “Natural Form” because they more closely followed the wearer’s body. While hip pads and small bustles were still worn, they were much more subtle than the fluffy bustles of the early 1870s and the shelf-like bustles of the later 1880s. Revue de La Mode (evening gowns), 1880
The lace ripple down the front is a nice touch. Revue de la Mode (day dresses), 1880
The pink polonaise/princess gown on the left is so pretty! La Mode Francaise, 1881
The swags are not quite as full as the previous years, but the rippled lace trim down the skirt front was still around.

The hip “croissants” were called “panniers” at the time. There was an 18th century style revival during the Natural Form Era thanks to the United States centennial, though the languid, low-set swags of the Natural Form Era bore little resemblance to the wide, shelf-like panniers of the Rococo period. The Natural Form Era’s version of panniers were at their puffiest during 1879 and 1880.

In addition to the photos of the original gown and the fashion plates, I also found other extant gowns with puffy panniers and swags:

American Day Dress, circa 1880
The museum has way too much bustle under this Natural Form Era gown in their display so the back looks funky. In reality, the “bustle” should fall in a long, graceful train with the bulk of the puff at thigh level.

French Silk Dress, circa 1880
So much fringe! But I really like the bow at the neckline.

Dress, circa 1876-1881
Another frustrating “there, but not there” photo of a very similar style gown with no other views available! Maddening! American Day Dress, circa 1881
Blue was obviously a very popular color at the time! I like the lower-hanging swag of this polonaise-style dress quite a bit.

Simplicity 4244 is a princess-line gown made as one piece fitted with French darts at the waist. Princess-line dresses were popular during the Natural Form Era. They could be quite costly to make because even though they look slim, the large, full-length pattern pieces can require lots of continuous yardage, especially since many had long trains. As an example, Simplicity 4244 requires 14+ yards of modern 45″ width fabric. Historically speaking, high-quality silks might only come in widths 23 or so inches wide, meaning a princess line dress could easily gobble up 20+ yards.  Most princess-line gowns fit very tightly and smoothly and were the body-con dresses of their day: 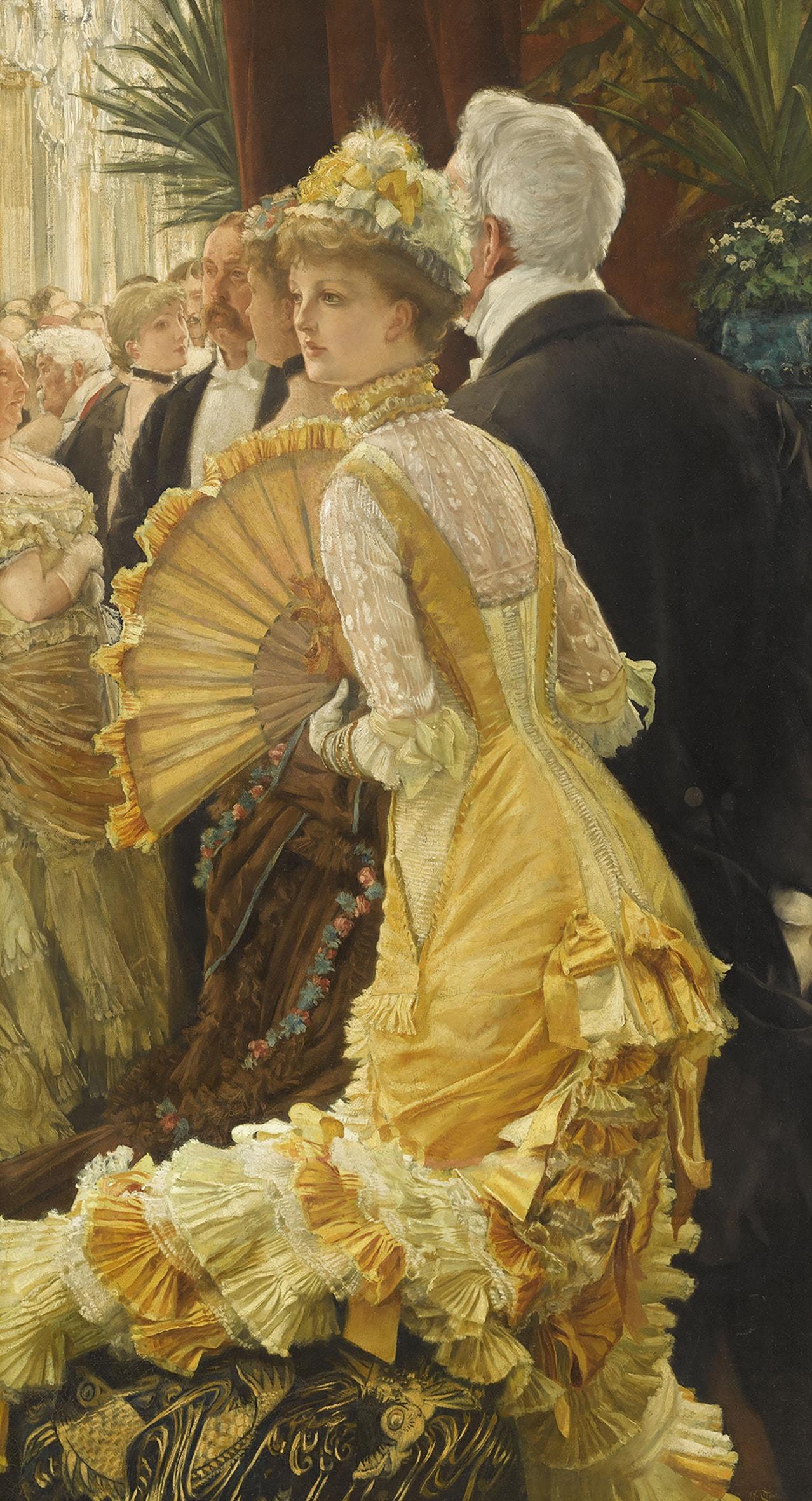 “The Ball” by James Tissot, 1880
A creme-de-le-creme princess-line ball gown with oodles of knife-pleated ruffles!

The languid pannier style, however,  is more of a feature of two-piece gowns and polonaises. Were there other one-piece princess gowns made in one piece with polonaise-like panniers worked into the design or was the original inspiration dress an unusual one-off? Turns out there were some others, like this pretty lavender princess-line gown:

Princess Line Gown, circa 1880
This gown from the DigitaltMuseum shares many similar features with Simplicity 4244: one-piece construction, a Vandyke (dagged/triangle) hem with ruffles, short/elbow length sleeves, a flat train, and even a little puffing at the sides.

However, the most exciting dress I found in my hunt was not in a museum, but from an eBay seller! All the Pretty Dresses, a blog that collects images of private-collection antique garments, luckily saved some images of it before it disappeared. And, lo and behold, it is nearly a perfect match for Simplicity 4244! Here’s Simplicity 4244’s line drawing:

And here’s the extant gown from All the Pretty Dresses:

This poor extant gown is in sorry shape, but the design elements are still there, clear as day! So Simplicity 4244 was indeed accurate in styling and at least common enough for there to be at least two examples left after 140 years.

With this new knowledge at hand, I took the plunge and ordered the pattern, fingers crossed that I hadn’t bitten off more croissant than I could chew…

After posting my final version of Simplicity 4244 on the Facebook group Historical Costume Pattern Reviews, Arlene Terrell contacted me with some fabulous news– she was a friend of Eve Faulkner, the proprietress of the Victorian Bridal Museum, and she not only had a larger version of the picture from the website, she had a photo of the original owner wearing the dress!

I am sharing these precious photos here with Arlene’s and Eve’s permission so you can see all the detailing and how the original fits on a body vs. a mannequin:

Arlene’s comments: “Here is the original dress as displayed […] the original wasn’t displayed over the correct foundation for the skirt and the hip drapes were stuffed with tissue paper, so perhaps this is what led the photo stylist down the wrong path .“

Arlene’s comments: “Here is the original owner wearing it as intended”

Curious how the pattern goes together? Keep reading:

15 thoughts on “Conquering the Croissants Part I: Researching Simplicity 4244”