Last time I fell down an enormous rabbit hole, it was while researching this 1840s men’s neck stock from Philidelphia:

I was not only about to find out where the stock was made, but all about the man who manufactured it! Through careful study, I was able to even narrow down the age of the stock to within 4 years– just based on the manufacturer’s stamp inside!

Anyway, this time around I have fallen down the rabbit hole with this skirt:

Isn’t the gold lovely? And that lace! The waist is bitty bitty: only 20 inches.

Unlike the stock (which I found in my favorite antique store and now own), this skirt is not mine, but an auction item on eBay waaaaaay out of my price range. I was just going to post a short little Facebook blurb about it because it’s so dang pretty, but then I looked closer at the pictures and found this:

Yes indeed! This skirt has a marker’s mark!

Fortunately, Boston is an old town, so there are plenty of maps available. Unfortunately, I didn’t find Mme Chesneau’s little shop deftly labelled as I was able to do for Mr. Ward. However! Her shop was in the heart of Boston– right off the Commons! The block she was located on is still relatively intact thanks to the presence of the Granary Burial Ground right behind it.

Today, the address belongs to a late Victorian building with a mix of offices, condos, and businesses inside. Here’s a realtor’s ad for the building (it’s a PDF, so it will download for you to open), if you are curious about the current interior. Sadly, very little, if any, of the original Victorian finishes appear to remain beyond the outside shell, but the street layout and numbers have not changed much at all (unlike poor Mr. Ward’s store locations which were both obliterated in the 1950s when Independence Mall was constructed). Mme Chesneau would also have been just up the block from the historical Tremont House when she owned her shop there in the late 1870s or early 1880s (judging by the style of the skirt). The Tremont House was a grand hotel built in 1829 and famous for being one of the first “modern” hotels with indoor plumbing, bellboys, and guest soaps: 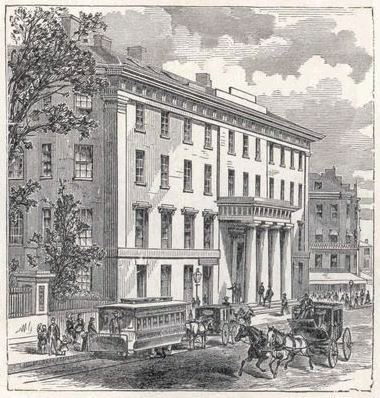 I’m sure guests made off with all the free soaps just like they do today…and that’s a good thing!

Sadly, the Tremont House was razed in 1895 and the office buildings that now fill the block around the old burial ground went up in its place.

I didn’t delve as much in-depth with this skirt as I did with the neckstock, but here are some nifty maps from the 19th and early 20th century showing how much (and how little) the area where Mme Chesneau would have worked has changed:

This view is from decades before the skirt was made, but it shows you how little the streets of Boston in this area have changed! This is the view of 6 Beacon street from the Boston Commons. The spire belongs to Park Church and the trees behind it are the Granary Burial Ground. It’s hard to tell which side of the street the other buildings are on, but one of them to the left in the background would house 6 Beacon Street. The domed building to the far left is the Massachusetts State House, built in 1798.

The view of 6 Beacon Street from 1877–near the time the skirt was made! You can see the big dome of the Massachusetts State House in the foreground with the spire of Park Street Church right behind it. 6 Beacon Street would have been in or near the tan building to the left of the church.

This view of 6 Beacon street was made at almost exactly the same time as our golden bustle skirt: 1879. This view shows the dark outlines of some buildings, but it’s not a very detailed map. There are, however, 2 dark buildings at the corner where Somerset Street meets with Beacon Street at the turn. 6 Beacon Street would be located in one of these.

This 1885 map is a bit more detailed. In the center you can see the label for the Burial Ground in big letters to the right of the commons. If you look closely, you can see the label for the Tremont House (Tremont H.) to the right. 6 Beacon Street is in the white space just above it (on this map, white space doesn’t necessary indicate an empty lot, but just means there was nothing of importance to the cartographer).

Check out this nifty map from 1894: it shows the subway routes! In the 1890s, Boston began to change very rapidly. This is the year Boston’s first modern hotel was no longer modern enough for the growing city and shut down. The map still labels the plot “Tremont Building,”, but the outline looks much more like the office building the replaced it a year later…

Sad day! The Tremont House is no more on this 1895 map, but the giant Victorian office building that stands in its place today is still there. 6 Beacon Street is right on the other side of the little street leading to the Granary Burial Ground, Tremont Place. The building is labelled as being owned by WJ Otis.

One last glimpse of 19th century Boston and 6 Beacon Street. The building numbered 14 is the office complex that replaced the Tremont House 4 years earlier. Behind it is where 6 Beacon Street would be. I do not know if Mme Chesneau was still in Boston, but it is very likely that the building she sewed the skirt in was long gone by this time (I tried to look up the age of the current building there, but short of diving into tax records, I could not find it).

I could probably look Mme Chesneau up in Boston’s tax and business registration records, but I never thought I’d get so involved with an eBay skirt I could never hope to own! So unless I find a random pile of money to buy the skirt, I’m going to stop obsessing over something I cannot have for now.

However, the story of the skirt does not end with my trunicated quest or Mme Chesneau, the woman that made it. Someone bought and wore this skirt… but who? The seller themselves has a little theory about the owner of the skirt to add to the mix, making this skirt a nifty little diversion for a historical fashion, genealogy  and georeference fans alike:

“We found 2 names associated with these clothes [there are other clothes available for auction from this seller]. A Miss D Hurd in a C 1915 dress and a calling card with a Mr and Mrs Ledyard Hart Heckscher. The older 1880s dresses may have belonged to Mrs Heckscher because their names are on a calling card with a note that states ” Fil de Main” Handkerchief sent to your grandmother Heckscher in 1869.”  The calling card looks of the late Victorian period. They may have been from Philadelphia or Boston / New York.”

A dress from a later generation, around 1912, from the seller’s other listings. If these are from a single family, you can tell the love of lustrous satin with netted lace overlay was passed down through the years!

This is what makes historical costume research so fun for me: the human element that leads you on a journey away from the seams and into the streets!

“Looking up Tremont Street toward Beacon Street, with the Granary Burying Ground to the left, taken around 1910. Photo courtesy of Boston Public Library.” – via Lost New England