I love a good bonnet, even if badly photographed. <3

Museum photography has come a long way in the past decade. I remember when the only way to explore a museum’s collection was to physically travel to view an exhibit in person, be buddies with a curator, or read about them in textbooks, sometimes with a blessed-but-grainy black and white picture the size of a domino. Now museums around the world have their collections photographed and available for free online!

We have gone from this: 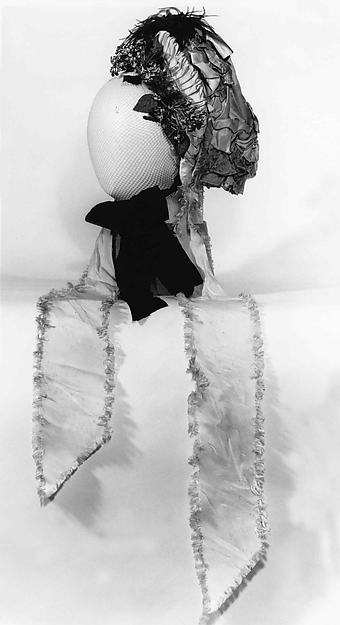 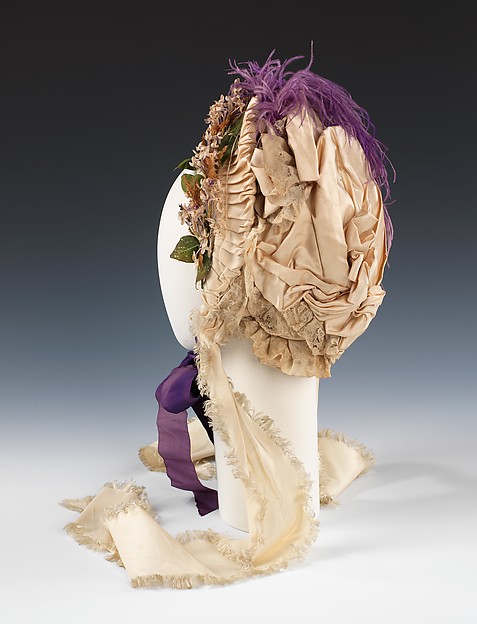 And believe me, I am infinitely grateful. But, I am also infinitely concerned with systematic forward progression and implementing improved standards of quality (i.e. I am demanding and persnickety). Today, I am picking on the Met because the Met is one of my favorite museums. They seem open and honest about their collections– even candidly blogging about some drawings in their collection were massively mis-attributed! You can even give them feedback about their website, rating it and saying what you liked and what you didn’t. I appreciate their openness and make full use of it. MMoA, you asked for it!

In my many invested hours of research (i.e. PINTEREST), I have discovered many beautiful Met Museum objects with hideous photos, in particular, 19th century bonnets and hats. Granted, there are plenty of hideous objects with lovely pictures as well. There is clearly a miracle-working photographer in the costume department because they made this clunky sunbonnet look so lovely I kind of want it…which is saying something because I LOATHE 19th-century sunbonnets! 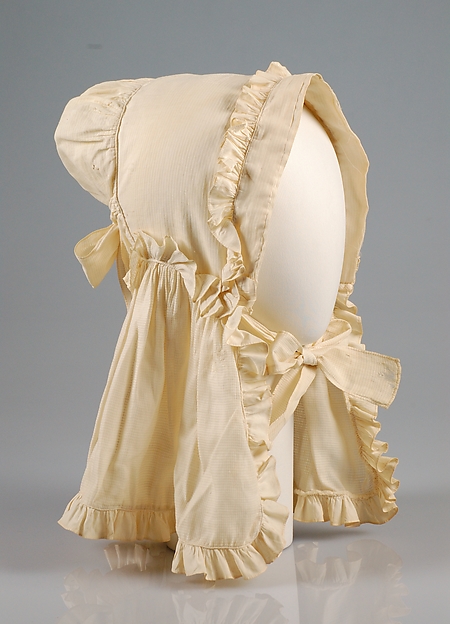 Cotton Sunbonnet, circa 1860
This photo makes it look good enough to actually wear!

Now, compare that picture with this one: 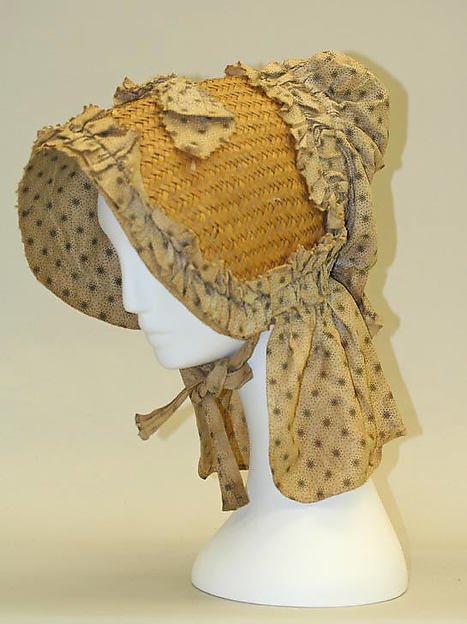 Sunbonnet, circa 1838
Ah, there’s the warm, familiar hatred again. If Jedi had to wear sunbonnets, I would instantly become a Sith. No questions! Sunbonnet Crusher duty? SIGN ME UP!

Okay, so maybe I am exaggerating a little. You see, that second bonnet isn’t terrible at all! In fact, it’s actually way more adorable than the photo lets on. It’s made of a spotted calico that’s kind of polka-dotty from a distance, it’s got pinked trim, a nifty straw brim, and a sweet bow perched on top. But that photo just does not do it justice when you compare it to other bonnet photographs in the collection: 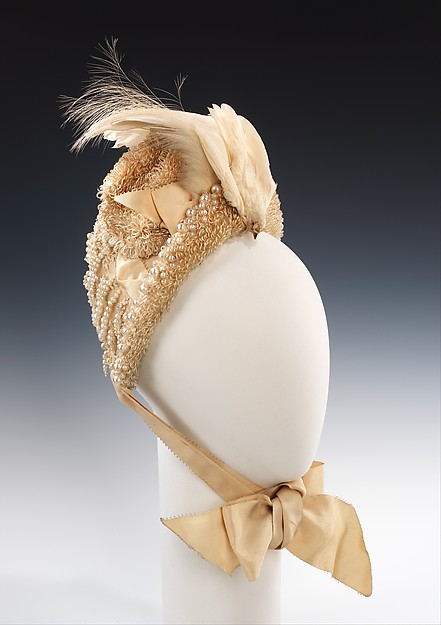 Snedden Designer Bonnet with Pearls, circa 1883
(another bonnet that has benefited from the leap in photography technology) 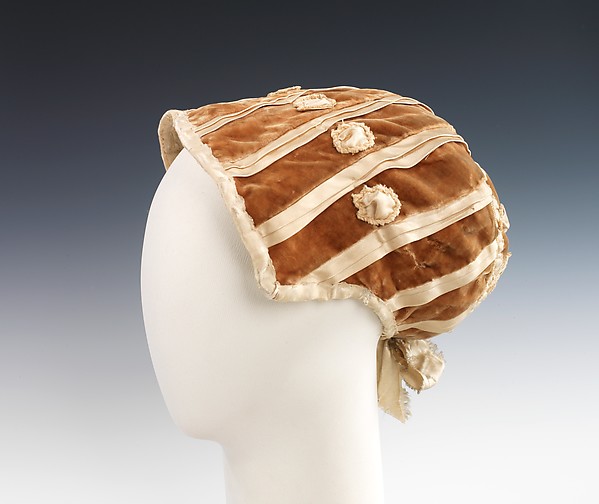 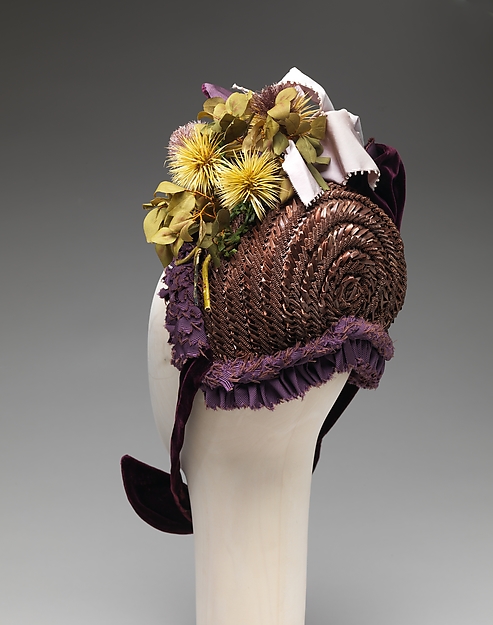 “But, Liz! Those are all fashionable, fancy-lady bonnets! You can’t compare a daytime 1850s sunbonnet to a 1880s millioneress’s bonnet!”

True: there are many bonnets of vastly different styles, decades, price-points and occasions, but being fancier doesn’t make them any less likely to be photographed poorly. The Met does not discriminate based on social class! Case in point: 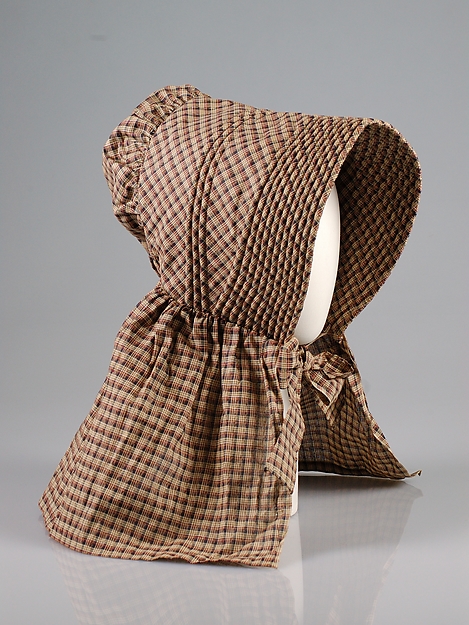 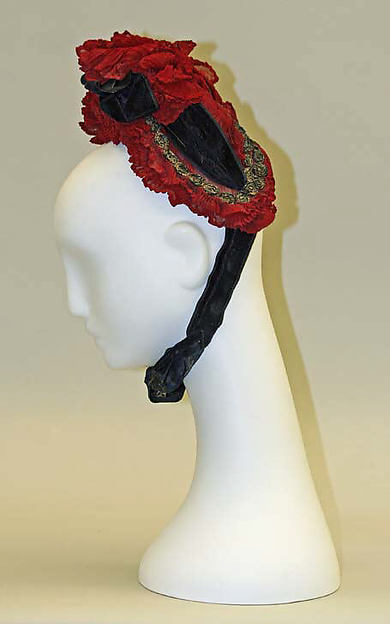 Which of these two photos looks like a million bucks to you?

I started making note of all the bonnets I found that were begging for a better photo. The list was quite long! However, I narrowed it down to just a few.

MOST of the bonnets are this list were not picked just because I thought they needed a prettier photo–though, confession: some are on the list because they are OMGorgeous! There are so many pretty-but-not-artistically-photographed bonnets in the Met’s collection, like this early 19th century bonnet. However, many of them, despite their flash-blasted, yellow-tinged photographs, still shine through with clear detail. Instead, I chose bonnets that I thought were actively hampered by their photo– those with great texture that was lost, fit that was hard to judge, or colors that weren’t properly portrayed, all details that are actively explored and sought after by costume and textile researchers.

THE TOP 10 BONNETS AT THE MET THAT DESERVE BETTER PHOTOS! 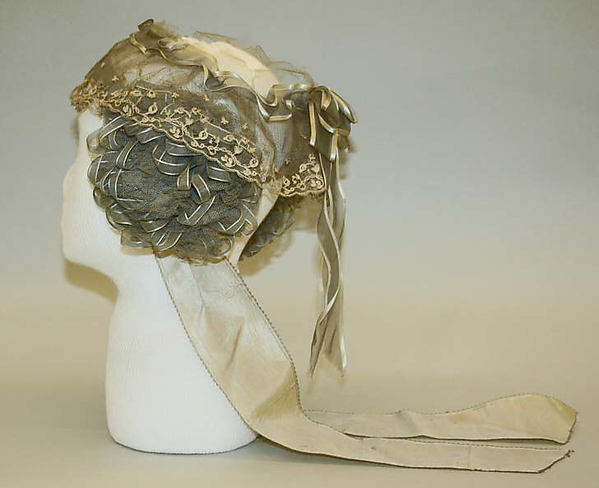 Originally #10 was this straw bonnet that I loved the shape of, but there is no view of the front. However, I stumbled upon this bonnet/headdress just before publishing my list. I was so intrigued, I knew it had to be on the list! There is no other “bonnet” like it in the Met’s collection and if that date is correct (question: has anyone seen something like this from the era?), it would make it one of the earliest pieces in the bonnet sub-category. I want to know more! 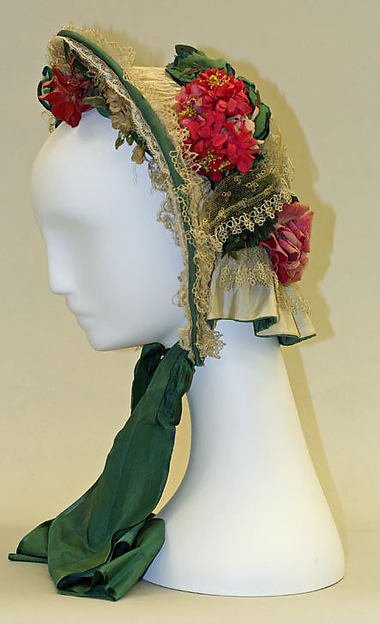 This is one of those “It’s just so pretty it needs to be shown off!” bonnets. The layers of trimmings are so lovely, but the dingy, grainy photo does its richness a great disservice. 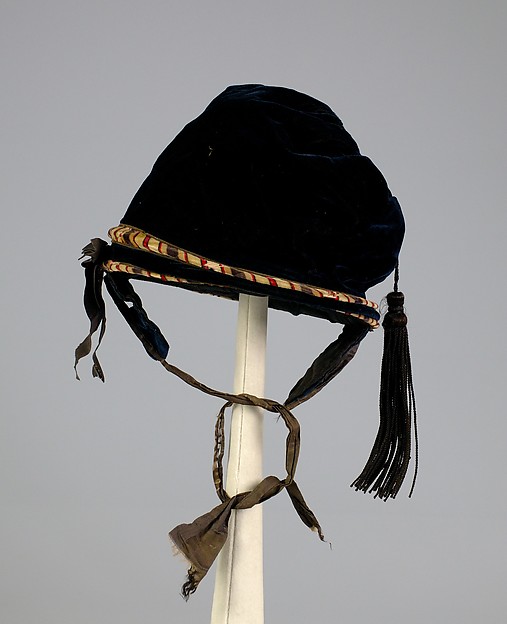 This bonnet already has a beautifully lit, crisp new photo, yet, it’s impossible to tell how it fits! It’s listed as a bonnet, but the shape and fit isn’t obvious. Does it perch on the back of the head? Is it a child-sized cap? Or is it bigger than it looks? This is a piece that would really benefit from a display head. 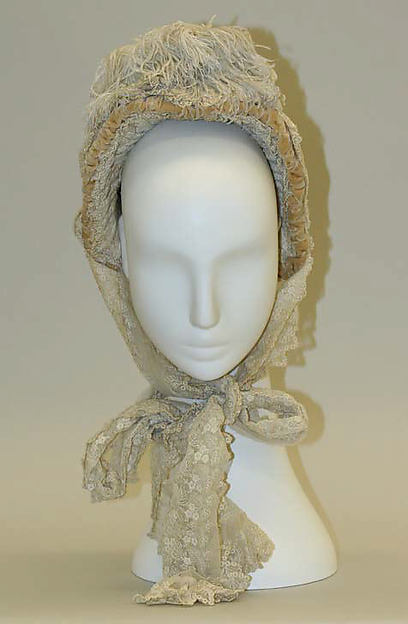 Another stunner suffering from bad lighting and graininess! This bonnet is mummified in lovely lace, has a velvet edge, and a feather on top! The interplay of textures and true color are lost, though, and the angle of the two photos almost look like two different hats! Click here to see the second photo of the back. You’ll see what I mean. Also, this hat has a photo of the designer’s label, but it’s not listed in the description (J. Pendlebury / Wigan). This was a very expensive hat during its day! It would be so lovely for a bride. 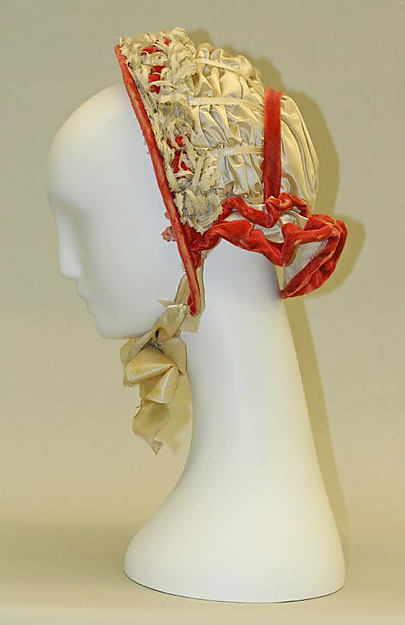 The vast majority of the Met’s mid-19th century bonnet collection suffers from small, badly-lit photos. I imagine they must have been doing them all in a  swift batch in order to give us, the demanding costuming community, visual references. The Met has worked hard to get photos for every object’s online catalogue page! They are getting closer to achieving that goal. I am so thankful for their hard work. However, this gal is beautiful, but the silk gathers and layers upon layers of delicate trimming aren’t very well portrayed. I also think it’s later in date than listed. Any bonnet experts have a firmer date for it? 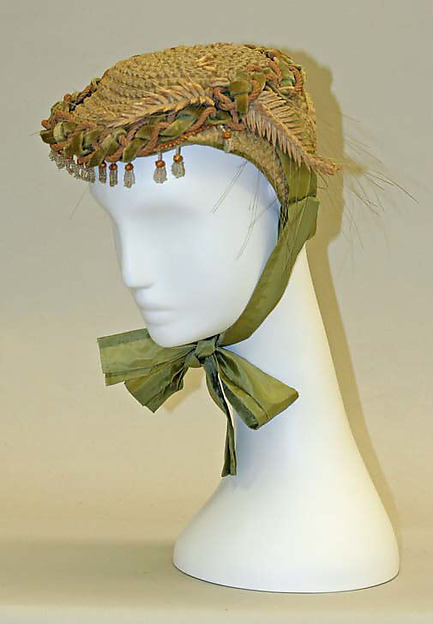 This bonnet is just fabulous! At first I thought that it was a lovely example of straw work, but then I read the description…can you believe this bonnet is made of horsehair?! I would have never guessed!  Once again, the small, grainy photos erase this bonnet’s main draw: the unique materials and lush interplay of textures. Just look at those woven plumes and tiny tassels! This is probably my personal favorite bonnet on the list. I would wear it in a heartbeat. 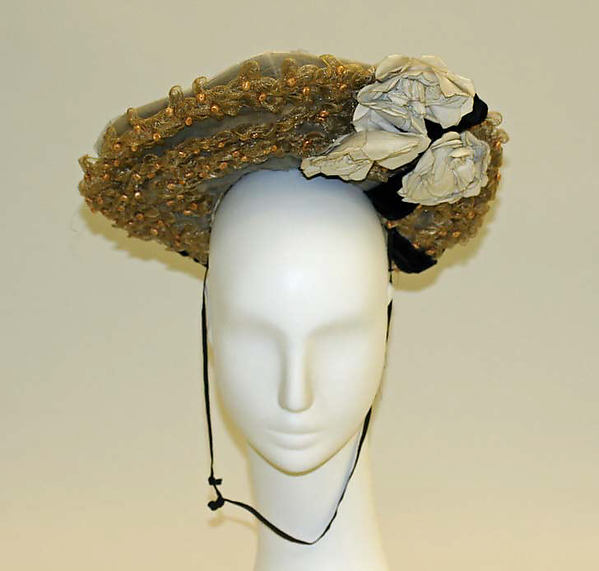 I’m calling this one that “WAT?!” bonnet not because I find it poorly designed (though the display certainly makes it look odd), but because it is in desperate need of a cleaning, some context, and a more accurate date. 125 YEARS, MET?! REALLY?! This bonnet/hat is from around 1900 and would have been paired with a Gibson Girl hairstyle, hence the shallow back (to fit around a chignon) and large forward swoop (to go over the puffy pompadour front). It even has a designer label inside that they photographed, but the cataloger failed to note in the description. It’s not a show-stopping hat by any means, but it certainly deserves better basic cataloguing in addition to a fresh photo! 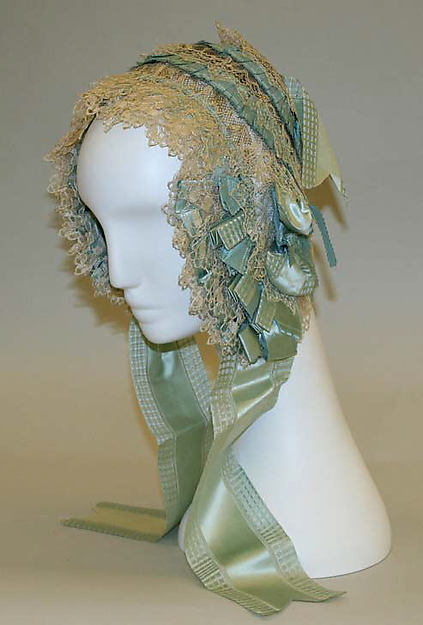 Just look at that lace and ribbon! Wow! Even in that terrible lighting, it looks amazing. However, the image is small and grainy, so you can’t see all the wonderful details. This one is just too pretty not to have a better photo!

This bonnet is so sad! It looks like a jellyfish washed up on the shore or a snail trying to crawl away. I suppose if you were a nice “Sunday’s best” bonnet that got labelled as a poke bonnet, you’d be sad, too. This bonnet would be so much happier if its beautiful silk satin shirring and lace were properly photographed on a stand or mannequin! 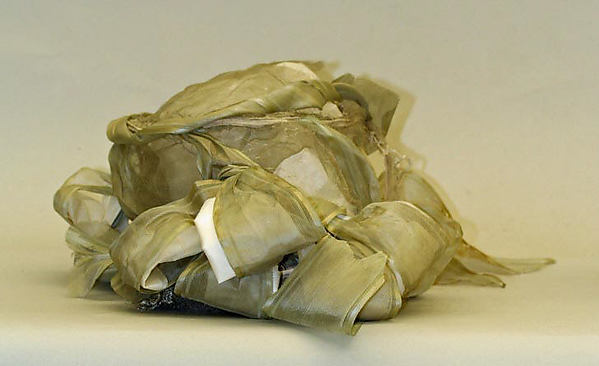 The last bonnet  looked sad, but this poor bonnet is actively trying to hide. Perhaps it’s in such poor shape that this is the only way to display it (like this crumbling 1830s straw bonnet), but it’s completely impossible to tell that it’s even a cap/bonnet. What’s even odder is that unlike many of the bonnets in the collection which suffer from dating swathes that range from a generalized 20 year period to the egregious 125 YEAR RANGE OMG MET WTF, this bonnet has been dated precisely to 1841. In addition, it was purchased with donation money in 1982, apparently by choice. Either it was part of a lot that had other pieces in it the Met wanted and the cap just came with, or they purposefully bought it, possibly with provenance granting it such a firm date, like a letter or label. And yet, here it is, just flopped on a table like a mound of seaweed.

The more I looked at these bonnets with less-than-ideal photos, the more I realized how shallow and callous it was to judge a bonnet by its photo. In our massively visual online culture, objects with the prettiest images often get sharing priority, meaning that many perfectly fabulous fashions get ignored! This affects not only personal research, but can affect the quality of conservation, too. Many objects that receive well-made professional photographs often receive special cleaning and repairs in order for them to display and photograph to the object’s best advantage. In a collection like the Met’s–with over 300+ bonnets alone– such a large undertaking would involve not only lots of time, equipment, and effort from the photographer(s), but a large investment from the conservation department– and let’s face it: we may love bonnets, but there are probably more pressing conservation projects than cleaning a common straw sunbonnet, no matter how cute it is.

Let me know which one is your favorite! Is it a delicate straw bonnet from the 1840s? A sky-high feathered stunner from the 1880s? A tubular Regency poke bonnet? Post a link below so I can see it!

2 thoughts on “Bonnets that Deserve Better: A Dozen Ugly Ducklings in the Met’s Headwear Collection”