This post is a bit of a weird ride– from Charles Dickens to Trolls to Britney Spears. But you could get a great hat out of the deal!

I should have written this post almost a year ago when I went to Dickens on the Strand with Mistress of Disguise back in December of 2018, but I really fell off the blogging wagon and didn’t. So, finally, here’s a blog post about my costumes for Dickens on the Strand 2018– beginning with my thifty hat makeover:

While it’s not the most flattering hat on everyone, the trilby (commonly misidentified as a fedora) comes in a vast array of materials and sizes. In fact, after ballcaps, beanies, and cowboy hats (here in Texas at least), the trilby is the most readily available male hats. You can even buy them at Walmart for less than $10.

I have a massive love of hats! I have at least 30 of them, some of them vintage, some new, and many modded for costuming. Some of them are also my husband’s hats, like his tricorn, cowboy hat, and numerous old fedoras/trilbies. However, both fedoras and trilbies have gotten a sour reputation recently because of their association with internet trolls and creepy pick-up “artists.” Due to these bad stereotypes, my husband hasn’t been wearing his old trilbies as much anymore, so they were just gathering dust in my closet.

But did you know that fedoras actually started as a popular unisex, feminist fashion in the 1880s and trilbies are perfect for transforming into Victorian lady’s hats? Yes, indeed! So when I needed a last minute hat to go with my flannel 1880s bustle dress, I decided to take the trilby back from the trolls and give one of those old hats a new life.

During the 1870s, bonnets began to be replaced by hats as the fashionable form of daytime headgear for ladies. The ancestor of the modern fedora was actually created in the 1880s as a hat worn by all-around badass Sarah Bernhardt, who wore the first fedora during a play called, well, Fedora! 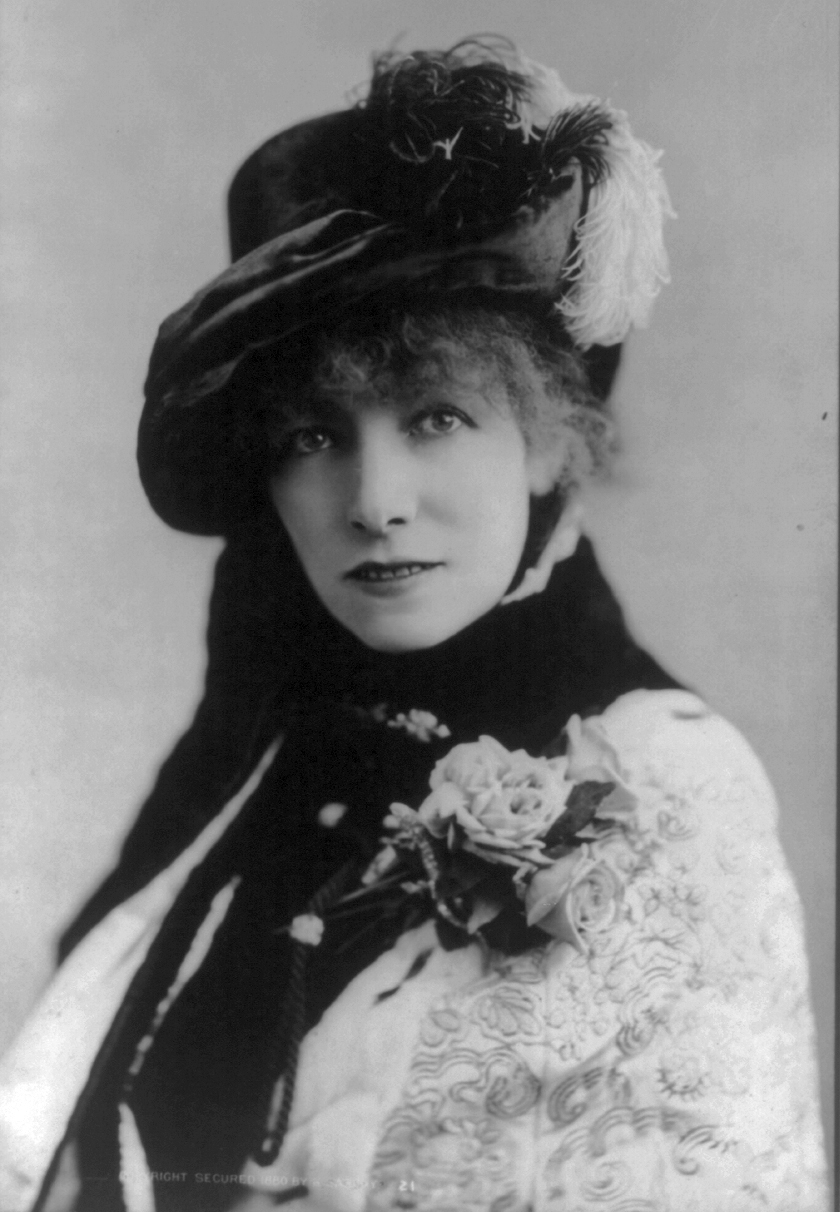 I couldn’t find a photo of Sarah Bernhardt in her original Fedora, but here she is in a different cool hat. You can see how you could easily make a similar hat by modifying a modern fedora.

In 1894, The Trilby hat was invented and also got its name from the hat style worn in the theatrical production, but the trilby was worn by a male actor and has thus been a man’s hat from the start. However, the shape shows up in women’s hats of the previous decade, making all our currently-much-maligned trilbies the perfect base for last-minute-panic Victorian bustle hats!

Natural Form Era hats. The Vintage Dancer has an excellent article on 19th century ladies’ hats! Click the fashion plate above to visit. 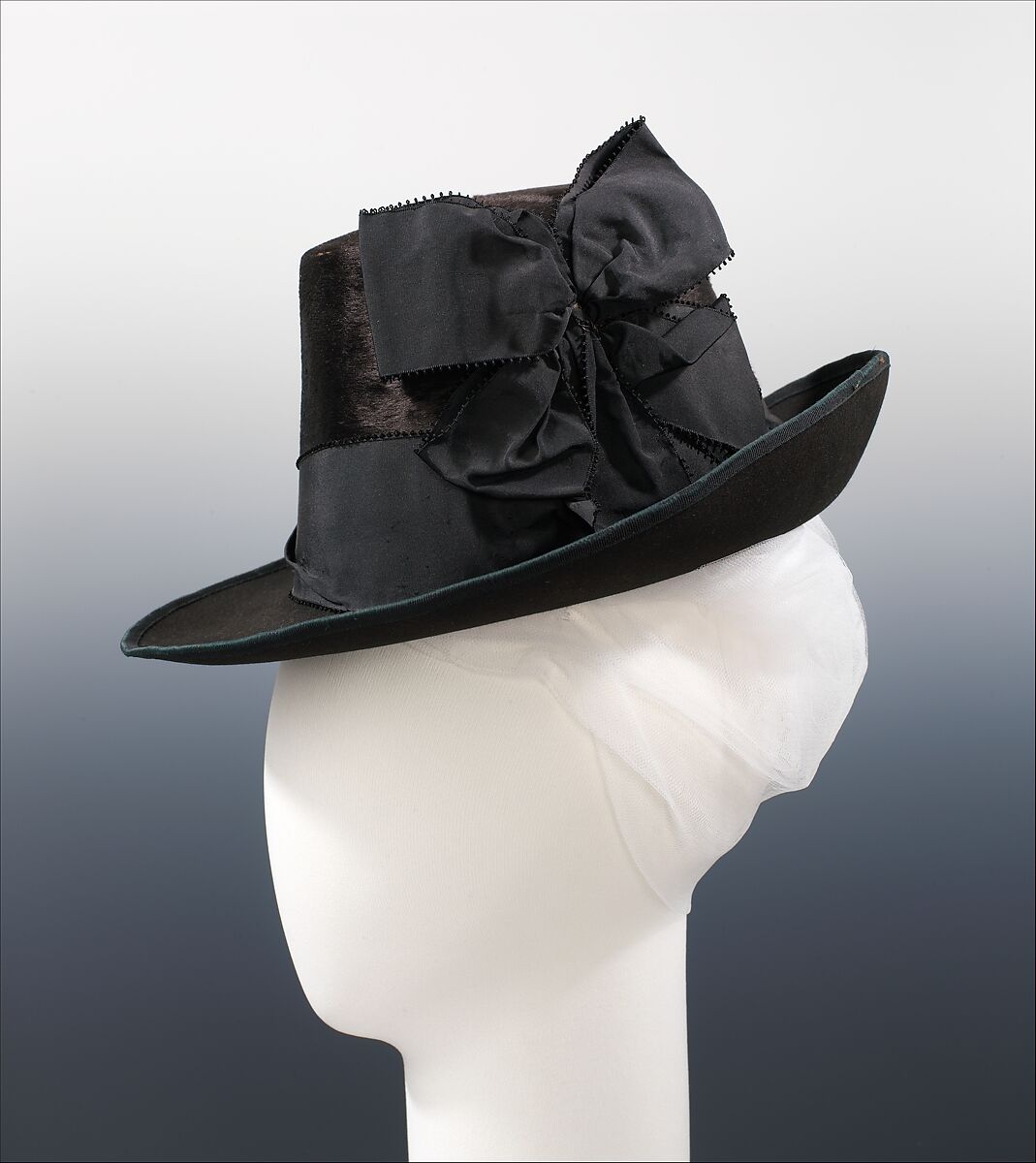 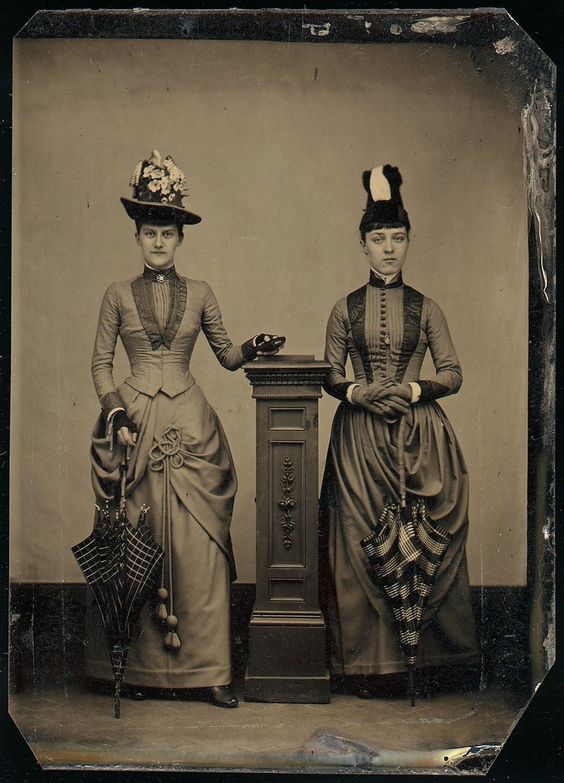 I took trimming inspiration for my last-minute trilby transformation from 1880s hats like the lady’s on the left.

Unfortunately, I didn’t take any in-progess pics of my Dickens on the Strand hat because– in my usual fashion– I made it literally the night before Megan and I left for Galveston! However, I did absolutely nothing to the base hat, just trimmed it (haphazardly).

I used 1 roll of cream-colored ribbon from Walmart, a netting remnant, and pinned an antique silver dime brooch to the front.

Now, there is a secret to every successful hat…and I’m going to spill the beans just for you.

As I have stated before, this is just a plain old man’s store-bought trilby. Even under all the trimmings, it’s still very visibly a modern trilby…probably because it’s a good two sizes too big! It’s my husband’s, so it’s an XL hat made to fit a 6′ 2″ dude. If I just plop it down on my head, it’s so huge it engulfs half my noggin!

Yet, most modern hats– even ones sized correctly for your head– sit far too low on the face. If you’ve ever gotten photos back from an event only to discover your face is all shadowed over and hidden by your hat, it’s because modern hats have very wide, deep crowns to sit far enough down on your head to keep them in place at the expense of your forehead.

Historical women’s hats, however, were designed to perch on top of elaborate hairstyles, particularly buns. Often, they hardly touched you head at all, sitting entirely atop a nest of fluffy hair instead.

And instead of relying on a deep crown to stay in place, women used hat pins.

Even if a hat had a deep crown, it often had an interior fabric “cap” or drawstring ring that kept the crown from swallowing your head.

Some well-designed modern hats still use this feature. This is the inside of my favorite modern “church lady” hat that I wear for Edwardian costumes. You can see the drawstring ring inside that adjusts to fit your head so the enormously tall crown doesn’t eat your face.

Any of these things can be done to modify a modern hat to fit in a historical manner. In the case of my trilby-turned-Victorian hat, I didn’t have time to put in a fitting ring, but I did have plenty of hair to stuff into it. This kept it aloft.

In fact, the true secret to historical hat success isn’t just the hat itself: it’s the hair under it!

Properly styled hair– even if it’s the most simplistic version of a period style– instantly takes you from hat rookie to hat champion!

To demonstrate this better, here is a series of hasty, terrible bathroom selfies I took.

Let’s start with a modern trilby I have that actual fits me correctly:

If you want to use a trilby to make a Victorian hat, I recommend starting with one that actually fits, or one slightly too small.

As you can see, it fits much better than my big brown one! But with the deep hat crown and modern hairstyle, the farthest back in time this hat takes me is high school in the early 2000s. No thanks!

BRING IN THE HISTORICAL HAIR!

This is my go-to basic hairstyle. It’s my collarbone length hair pulled up in a simple bun and then my beloved “curl loaf” slapped on the front. Nothing fancy.

This style is perfect for the 1880s and 1890s, but it can carry you from the late 1870s to the 1910s if you really need to. Plus, it works especially well with hats! The bun gives you something to perch your hat on so it stays off your face, and it give you something to safely stab hat pins into to keep everything in place. The curls up front also help lift the crown of the hat away from your face and, if you’ve got strong features or a large face like me, the curls peek out from under the hat a bit to soften your face. Plus, the hairstyle looks good on its own, in case you have to remove your hat.

Now that you’ve got your hair in place, you can play with how you wear your hat! To instantly take a trilby from modern to old-fashioned, wear it on the back of your head for a more bonnet-like appearance:

A fashion plate from the late 1870s showing bonnet-like hats worn on the back of the head to take trimming inspiration from.

You can also wear the trilby backwards so that the curled part of the brim is at the top of your head to help disguise the modernness even more. Covered in trimmings like puffy bows and feathers or covered in fabric to match your dress will further transform it!

Covered in lace and fabric, a modern trilby could be used as a base for these 1870s bonnets! Notice how these bonnets/hats are sitting way up high on a giant mound of hair, as was fashionable in the 1870s. The hats aren’t even touching their faces or necks. Worried you don’t have enough hair? Don’t worry! Most Victorians used plenty of hairpieces to make such fab hairstyles.

Another way to wear it is perched up on your hair completely, tilted forward a tad. Rather than disguising the shape of the trilby, this angle shows off the full shape and works well for the more tailored looks of the 1880s:

Of course, wearing it this way also puts your hair on display more, so make sure the back is nice and neat (unlike mine, ha!).

No matter how you choose to wear it, however, you will want to trim it. Depending on your trilby’s material. you might be able to get away with a few ribbons or spray of flowers, but the Victorians loved trims and, as you can see in the fashion plate examples, the base hat is often buried under a mound of bows, lace, feathers, flowers, and other crazy-fun whatnots! So get creative and go wild with the trims!

For my 1880s dress, I wore my/my husband’s giant trilby perched on top of my head. It was so huge it still kind of ate my head, but it worked perfectly for a last-minute hat with not a lick of hat blocking required! Plus, it was inexpensive. Since I recycled an old hat, I only had to spend money on the ribbon, which was, like $3. I guess if you wanted to count it, the $10 brooch was the biggest expense, though I had that on-hand, too, or it could easily have been replaced with a big button. Is this method perfectly HA and the pinnacle of design? Ha, no! But all-in-all, it worked just as I needed it to!