This is, I admit, a slight “fluff” post, but I had to share this fabulous poem about early Regency fashion as seen through the eyes of a woman alive at the time: Mary Darby Robinson. Mary’s quite a fascinating character herself with pretty impressive resume. From acting to writing to distracting royalty, she was never idle (nor without opinion)! Her humorous poem passes judgement on the latest fashions as ugly and immodest, but she herself was well known for her own scandalous fashion choices. Oh, how old age mellows you and “those darn kids” keep doing crazy things that, of course, you NEVER did when you were young!

A FORM, as any taper, fine;
A head like half-pint bason ;
Where golden cords, and bands entwine,
As rich as fleece of JASON.

A pair of shoulders strong and wide,
Like country clown enlisting ;
Bare arms long dangling by the side,
And shoes of ragged listing !

Cravats like towels, thick and broad,
Long tippets made of bear-skin,
Muffs that a RUSSIAN might applaud,
And rouge to spoil a fair skin.

Long petticoats to hide the feet,
Silk hose with clocks of scarlet ;
A load of perfume, sick’ning sweet,
Bought of PARISIAN VARLET.

A bush of hair, the brow to shade,
Sometimes the eyes to cover ;
A necklace that might be display’d
By OTAHEITEAN lover !

A bowl of straw to deck the head,
Like porringer unmeaning ;
A bunch of POPPIES flaming red,
With motly ribands streaming.

Bare ears on either side the head,
Like wood-wild savage SATYR ;
Tinted with deep vermilion red,
To shame the blush of nature.

Red elbows, gauzy gloves, that add
An icy cov’ring merely ;
A wadded coat, the shape to pad,
Like Dutch-women — or nearly.

Such is CAPRICE ! but, lovely kind !
Oh ! let each mental feature
Proclaim the labour of the mind,
And leave your charms to NATURE.

In her poem, Mary is obviously a bit bitter, but she certainly had good reason to be. Abandoned by her former lovers, left partially paralyzed, and impoverished on her old age, Mary turned to writing as an escape. Her poem, while not very kind to the current fashion, ultimately laments the fact that women are expected to value their looks and “trendiness” more than their intellect–an issue we continue to struggle with over 200 years later.

It struck a cord with me, reminding me of all the horrible personal abuses many women go through each day, but unlike Mary, I don’t agree that it’s right to be so harsh on someone for the way they dress just because I think it’s ugly. Women get enough of that from the people who judge us only for our physical attractiveness. Why should those trying to help women be recognized as intellectual beings add to that abuse? Even as costumers, we are not immune. We can be judged by outsiders for our old fashioned style, choosing to “mutilate” ourselves with corsets, or just our general weirdness. Women get bullied all the time at conventions and events by people who think a superhero costume is an excuse for sexual harassment or who think only skinny girls can cosplay skinny characters. Even our fellow costumers can be a source of unnecessarily harsh judgements about our choice of costume– too sexy, too historically inaccurate, too cliche. We are not just our clothes, even if the costume is taking center stage. There is still a person inside!

This amazing construct is Sofia Magdalena‘s wedding gown (a robe de cour, which is a super-fancy court gown) worn at the wedding in the Royal Chapel November 4, 1766. Sofia Magdalena was the queen of Sweden February 1771 – March 1792. She had fabulous, rich taste in clothing! Not only did she wear this magnificent wedding gown, her portraits portray her as ever flamboyant and trendy.

Sofia was actually a very private person and found constant court visits and public appearances wearisome. She was introverted and polite, preferring to stay at home out of the limelight. Imagine her horror when it was rumored that her firstborn Heir Apparent was supposedly illegitimate!

Neither she nor her husband King Gustav II were sexually experienced or even very interested in any activity of that sort (It took nine years for them to consummate their marriage), so they employed the much more experienced Count Adolf Fredrik Munck af Fulkila to be a “bedchamber coach” of sorts.  The scandal rocked the Swedish court (and produced some very crude and risque caricatures in the process). It did not help that the royal family paid Munck handsomely and promoted him, enforcing the rumor that Munck had been hired to directly impregnate the queen. Even the King’s mother believed the rumor and Sofia was so offended that she refused to talk to her mother-in-law ever again. 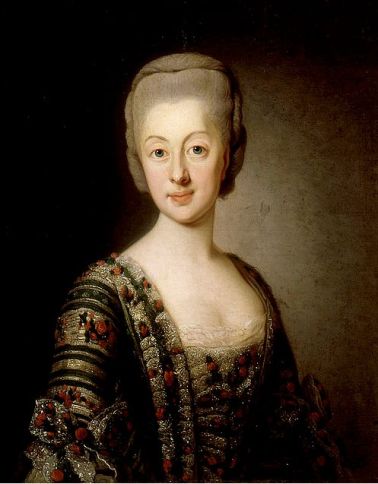 Sofia’s trials didn’t end there. Her husband was murdered in 1792. After his death, Sofia withdrew from society and made a few small waves once again by only wearing mourning clothes for formal visits and appearances, but not wearing mourning clothes in private. Having never really desired public attention, Sofia isolated herself from the court, focusing her energy on family and charity. She died in August of 1813 at the age of 67.

Being queen is never a simple task, but judging by the lives of Sofia Magdalena and her contemporary, Marie Antoinette, being a Queen Consort in the mid-18th century was a grueling, tragic task. The clothes may be beautiful, but with distant husbands, judgmental relatives, and rumor mills, it hardly seems worth it!

I would never want to be an 18th century queen. Not for all the golden coaches in the world…